Bensonhurst is a large, multiethnic neighborhood in the southwestern part of the New York City borough of Brooklyn, in the United States. As defined by the New York City Planning Commission, the neighborhood's borders are 14th Avenue and Dyker Heights to the west, 60th Street Borough Park to the north, McDonald Avenue and Avenue N Midwood to the east and northeast, Stillwell Avenue and 86th Street southeast Gravesend, and 86th Street and 16th Avenue Bath Beach on the south and southwest.

It is well known as a Little Italy of Brooklyn due to its large Italian-American population.

Bensonhurst has the largest population of residents born in China of any neighborhood in New York City and is now home to Brooklyn's second Chinatown. The neighborhood accounts for 9.5% of the 330,000 Chinese-born residents of the city, based on data from 2007–2011. 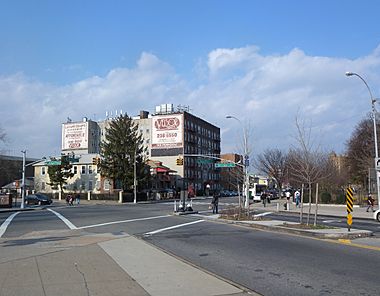 Bensonhurst derives its name from Egbert Benson (1789-1866), whose lands were sold by his children and grandchildren to James D. Lynch, a New York Real Estate developer. Lynch bought the old farmlands of the Benson family in mid 1880s, and by 1888, began selling private lots in an area dubbed as Bensonhurst-by-the-Sea, current neighborhood of Bath Beach. The first sale of lands in "The New Seaside Resort" area was advertised in July 24, 1888 issue of the Brooklyn Daily Eagle.

Bensonhurst has a population of over 151,000 inhabitants as of the 2010 United States Census.

With a large Italian-American population, Bensonhurst is usually considered the main "Little Italy" of Brooklyn. The Italian-speaking community remains over 20,000 strong, according to the census of 2000. But, the Italian-speaking community is becoming "increasingly elderly and isolated, with the small, tight-knit enclave in the city slowly disappearing as they give way to demographic changes." Its main thoroughfare, 18th Avenue (also known as Cristoforo Colombo Boulevard) between roughly 60th Street and Shore Parkway, is lined with predominantly small, Italian family-owned businesses—many of which have remained in the same family for several generations. 86th Street is another popular local thoroughfare, lined by the arches of the BMT West End Line.

Around 1989, an influx of immigrants from China and the former USSR began to arrive, mainly from Southern China, Russia, Ukraine, Georgia and Armenia. In the 1990s Bensonhurst rapidly grew in cultural diversity. Bensonhurst is home to many ethnic Polish, Ukrainian, Russian, Albanian, Greek, Turkish, Uzbek, Arab, Palestinian, Egyptian, Lebanese, Pakistani, Mexican, Guatemalan, Ecuadorian and Puerto Rican Americans. In 2000, the New York City Department of City Planning determined that just over half of the residents were born in another country. By 2013, then-Mayor Michael Bloomberg announced that the city's foreign-born population had reached a record high, and that Bensonhurst had the city's second-highest number of foreign-born people with 77,700 foreign born immigrants in the neighborhood, just after Washington Heights. 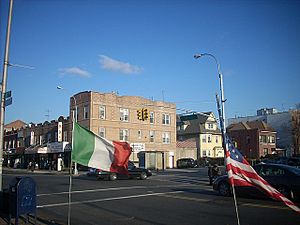 Bensonhurst has long been well-known as a Little Italy of Brooklyn, containing a large Italian-American and Italian immigrant population. The annual Festa di Santa Rosalia (commonly known as "the Feast" to locals), is held on 18th Avenue from Bay Ridge Parkway (75th Street) to 66th Street in late August or early September. "The Feast" is presented by Bensonhurst resident and marketer Franco Corrado, as well as by the Santa Rosalia Society, on 18th Avenue. Born in Rome in 1955, Corrado has been an active social member of the Italian-American community for the past 20 years. St. Rosalia is the patron saint of the city of Palermo and is sometimes venerated as the patron for the entire island of Sicily. The annual end-of-summer celebration attracts thousands. Bensonhurt also hosts a Columbus Day parade. 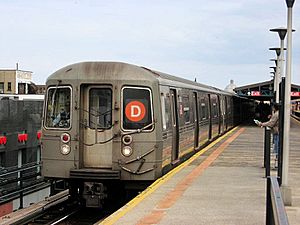 Below the West End Line, served by the D train along on 86th Street between 18th Avenue and Coney Island – Stillwell Avenue, now emerging another Brooklyn Chinatown (布鲁克林華埠). However, as of the 2010s it is currently mixed in with different ethnic businesses and people, especially with the many Italians and Russians in the Bensonhurst neighborhood, with the Chinatown area of Bensonhurst resembling more of Manhattan's Chinatown of the 1970s-80s when it was in expansion mode, but still mixed in with other ethnic enclaves. Overall, the Chinatown section of Bensonhurst remains heavily mixed with Italian, Jewish, and Russian residents.

Within recent years, most new businesses opening within this portion of Bensonhurst's 86th Street, especially between 20th Avenue and 25th Avenue, have been Chinese. The D train is directly connected from the Grand Street station in Manhattan's Chinatown (紐約華埠) to this rapidly growing Chinese enclave between 18th Avenue and 25th Avenue, and it is indirectly connected to the 8th Avenue Chinatown by the D train and N W trains.

With the large migration of the Cantonese as well as some Fuzhou people in Brooklyn now to Bensonhurst, and along with new Chinese immigration, other small Chinatowns have also started to emerge in other parts of Bensonhurst like 18th Avenue and Bay Parkway, but integrated with other ethnic groups and businesses. The N W trains stations are also located in these sections as well.

As a result, Bensonhurst now has several small emerging Chinatowns, but they are more scattered and mixed in with other ethnic enclaves in contrast to the Homecrest/Sheepshead Bay section of Brooklyn where there is only one small emerging Chinese enclave on Avenue U. This means Bensonhurst has much higher proportion of Chinese than the Homecrest/Sheepshead Bay area.

The newly emerging Chinese enclaves in sections of Bensonhurst and another one in Homecrest/Sheepshead Bay are primarily Cantonese populated and are more of extensions of the Western Cantonese section of Manhattan's Chinatown or Little Hong Kong(小香港)/Little Guangdong(小廣東) or Cantonese Town (粵語埠). However, there are small numbers of Fuzhou and Mandarin speakers.

According to the Daily News, Brooklyn's Asian population, mainly Chinese, has grown tremendously not only in the Sunset Park area, but also in Bensonhurst, Dyker Heights, and Borough Park. In Bensonhurst alone, from 2000 to 2010, the Asian population increased by 57%. The study also shows that Asians very often live in houses that are divided into studio apartments, which means there is a possibility that the increased Asian population could be more than what the census represents and causing stressors on the growing Asian population in Brooklyn. 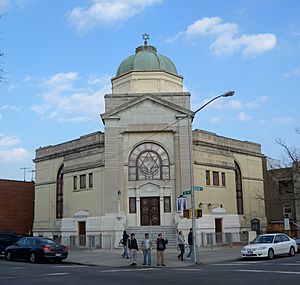 As there are no official neighborhood designations in New York City, Bensonhurst does not have any official boundaries. Still, parts of Bath Beach, Mapleton, Dyker Heights, Gravesend, and Borough Park are sometimes considered parts of Bensonhurst. However, Bensonhurst-proper includes the area bounded by 86th Street, 14th Avenue, 60th Street, McDonald Avenue, Avenue P, and Bay Parkway.

Bensonhurst is patrolled by the NYPD's 62nd Precinct. McDonald Avenue from Avenue I to Kings Highway is sometimes considered the eastern boundary.

The area's local post office is the U.S. Post Office-Parkville Station located at 6618 20th Ave., was listed on the National Register of Historic Places in 1988.

The D train, which runs on the BMT West End Line above 86th Street, provides a direct connection to Grand Street in Manhattan while the N W trains, which runs on the BMT Sea Beach Line near 63rd Street, provides a direct connection to Canal Street. This provides convenient commutes into Manhattan's Chinatown for the growing Bensonhurst Chinese population. The Sea Beach Line has a station at Eighth Avenue in Brooklyn's Sunset Park Chinatown and a transfer to the West End Line is available at New Utrecht Avenue / 62nd Street. The IND Culver Line along McDonald Avenue, carrying the Template:NYCS Culver south trains, also runs through the most northeastern end of Bensonhurst between the Bay Parkway and Kings Highway stations.

Bensonhurst has long been portrayed in film, art, and literature:

All content from Kiddle encyclopedia articles (including the article images and facts) can be freely used under Attribution-ShareAlike license, unless stated otherwise. Cite this article:
Bensonhurst, Brooklyn Facts for Kids. Kiddle Encyclopedia.