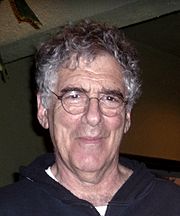 Elliot Gould (born as Elliott Goldstein August 29, 1938) is an American actor. He was born in Brooklyn, New York City. He is mostly known for his roles in many films including M*A*S*H (1970), Bob & Carol & Ted & Alice (1970), and Ocean's Eleven (2001). He has also made guest appearances on many television such as Jack Geller in Friends.

Gould's parents were Jewish; Gould says he has a very deep Jewish identity. He married singer and actress Barbra Streisand in 1963. The couple separated in 1969 and divorced in 1971. Their son is actor Jason Gould (born 1966).

All content from Kiddle encyclopedia articles (including the article images and facts) can be freely used under Attribution-ShareAlike license, unless stated otherwise. Cite this article:
Elliott Gould Facts for Kids. Kiddle Encyclopedia.