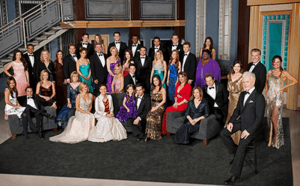 Set in the fictional city of Port Charles, New York, General Hospital debuted on April 1, 1963, the same day that rival network NBC launched its own medical daytime drama, The Doctors. The show originally aired for a half-hour until the network expanded it to the unusual length of 45 minutes in 1976, and then to a full hour in 1978. The serial was created by soap writers Frank and Doris Hursley, a husband-and-wife team.

General Hospital is credited for starting several trends in the soap opera genre in the 1980s, most notably that of the fast-paced action-adventure plotlines that were remarkably different from the more traditional domestic and social issues that had been the sole focus of most soap operas during the previous decades. In 2003, when GH was celebrating its 40th anniversary, TV Guide named it "The Greatest Soap Opera Of All Time." In addition, GH was also named as one of TIME Magazine's "Top 100 Television Shows of All Time."

All content from Kiddle encyclopedia articles (including the article images and facts) can be freely used under Attribution-ShareAlike license, unless stated otherwise. Cite this article:
General Hospital Facts for Kids. Kiddle Encyclopedia.