Coney Island Creek is a 1.8-mile-long (2.9 km) tidal inlet in Brooklyn, New York City. It used to be a 3-mile-long (4.8 km) continual strait and a partial mudflat connecting Gravesend Bay and Sheepshead Bay, making Coney Island an actual island, but the eastern half of the creek was filled in by land owners and city construction projects during a period spanning the early to mid 20th century. 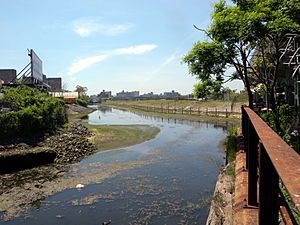 Coney Island Creek extends eastward 1.8 miles (2.9 km) from Gravesend Bay to Shell Road and separates the west end of Coney Island from the neighborhoods of Gravesend and Bath Beach. The west end of the creek is bordered by Coney Island Creek Park and Kaiser Park on the south side, and Calvert Vaux Park on the north side. The creek is crossed by the Cropsey Avenue and Stillwell Avenue bridges as well as two parallel rail trestles carrying the West End and Sea Beach subway lines (respectively served by the D train and N train). The eastern end is bordered by the Shore Parkway on the north side and Neptune Avenue on the south side. Marine traffic is restricted by a cable net between Cropsey and Stillwell Avenues. The eastern portion of Coney Island Creek runs along private industrial property and several acres owned by Keyspan, the local electricity provider. The creek terminates at Shell Road where a storm sewer emerges from under the road (designated stormwater outfall CI-641 in city plans).

At the time of European settlement the land that makes up the present day Coney Island was several barrier islands with interconnecting waterways that were all constantly changing shape. The waterway that became Coney Island Creek did not originally extend across the back side of the island since part of the land on the west end was a peninsula called Coney Hook. Hubbard's Creek, which ran down the eastern side of the peninsula, connected directly with the ocean. In 1750 a one quarter mile long canal (called the "Jamaica Ditch") was dug through the Coney Hook salt-marsh from a creek connecting to Gravesend Bay east to Hubbard's creek. This new waterway, allowing shipping traffic to travel from Jamaica Bay to New York Harbor without having to venture out into the ocean, connected Gravesend Bay and Sheepshead Bay together. The waterway behind the islands was called Gravesend Creek in the early 19th century since it cut below the town of Gravesend (later the name was used interchangeably with "Coney Island Creek"). Eventually Hubbard's and the other creeks and inlets that separated the islands were filled by a combination of natural process and land development, leaving just a single island that came to be called Coney Island and a single creek behind it that came to be called Coney Island Creek.

Coney Island Creek was still a minimally navigable waterway over its 3-mile length through the turn of the 20th century. In a period from the late 19th century through the early 20th century there were plans to turn the creek into the Gravesend Ship Canal. The plan including re-dredging the creek into a canal running in a straight east-west line and filling all the marsh land either side of the creek to expand the urban grid to the edge of the canal. The plan was eventually abandoned and by 1924 local land owners had filled a portion of the creek. A major section of the creek was further filled in to allow construction of the Belt Parkway in the 1930s. More fill was added in 1962 with the construction of the Verrazzano-Narrows Bridge. This turned Coney Island Creek into an inlet with the western and eastern ends of the island becoming peninsulas. None of the creek remains at the eastern end and that terminus, Sheepshead Bay, has been dredged and, for the most part, enclosed in bulkheads. The path of the landfill of what used to be the creek follows Shore Parkway, Guider Avenue, and the triangular block between Neptune Avenue and Cass Place to a bulkhead at Sheepshead Bay. 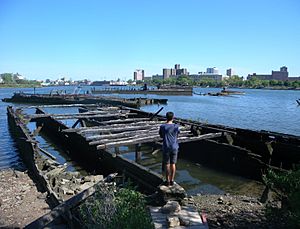 Burnt, sunken barges in Gravesend Bay mouth of the creek

A northwestern part of the creek is known as a "ship graveyard" for the dead and abandoned ships found there. At southern shore of the creek, the remains of a 45 feet (14 m) yellow submarine, the Quester I, protrudes from the water. Built from salvaged metal in the late 1960s, it was never able to maintain an even keel and was abandoned.

Though heavily polluted, Coney Island Creek was expected to undergo some minor cleanup between 2018 and 2020.

All content from Kiddle encyclopedia articles (including the article images and facts) can be freely used under Attribution-ShareAlike license, unless stated otherwise. Cite this article:
Coney Island Creek Facts for Kids. Kiddle Encyclopedia.