It is known for its high population of Russian-speaking immigrants, and as a summer destination for New York City residents due to its beaches along the Atlantic Ocean and its proximity to the amusement parks in Coney Island.

Brighton Beach is included in an area from Sheepshead Bay to Sea Gate that was purchased from the Indians in 1645 for a gun, a blanket and a kettle.

Brighton Beach was located on sandy terrain, and before development in the 1860s, had mostly farms. The area was part of the "Middle Division" of the town of Gravesend, which was the sole English settlement out of the original six towns in Kings County. By the mid-18th century, thirty-nine lots in the division had been distributed to the descendants of English colonists.

In 1868, William A. Engeman built a resort in the area. The resort was given the name "Brighton Beach" in 1878 by Henry C. Murphy and a group of businessmen, who chose the name as an allusion to the English seaside resort of Brighton. With the help of Gravesend’s surveyor William Stillwell, Engeman acquired all 39 lots for $20,000, a "bargain price." This 460-by-210-foot (140 by 64 m) hotel, with rooms for up to 5,000 people nightly and meals for up to 20,000 people daily, was close to the then-rundown Coney Island area, so it was mostly the upper middle class that went to this hotel. The 400-foot (120 m), double-decker Brighton Beach Pavilion was also built nearby. "Hotel Brighton" (or Brighton Beach Hotel) was situated on the beach at what is now the foot of Coney Island Avenue, and was accessed by the Brooklyn, Flatbush, and Coney Island Railway (the present-day BMT Brighton Line), which opened on July 2, 1878.

Adjacent to the hotel, Engeman built the Brighton Beach Race Course for thoroughbred horse racing. In December 1887, an extremely high tide washed over the area, creating a new, temporary connection between Sheepshead Bay and the ocean. Wrote the Brooklyn Daily Eagle: "Unless [Engeman] is very lucky the next races on the Brighton Beach track will be conducted by the white crested horses of Neptune."

After that extremely high tide, and a decade of beach erosion, the Brighton Beach Hotel, by then owned by the Railway, faced the possibility of being "undermined and carried away." A plan termed "highly ingenious and novel" was initiated by the superintendent of the Railway, J.L. Morrow, and its Secretary, E.L. Langford, to elevate and move the building as a whole, 495 feet further inland. This was accomplished by lifting the estimated 5000 ton, 460 by 150 feet (140 m × 46 m) building, using 13 hydraulic jacks, after which 24 lines of railroad track – a mile and a half length in total – were laid under it, and 112 railroad "platform cars" (flat cars) pulled by six steam locomotives were used to pull the hotel away from the sea. This careful engineering (by B.C. Miller) made the move successful; it began on April 2, 1888, and continued for the next nine days, and was the largest building move of the 19th century.

Anton Seidl and the Metropolitan Opera brought their popular interpretations of Wagner to the Brighton Beach Music Hall, where John Philip Sousa was in residence,and the New Brighton Theater was a hotspot for vaudeville. Visitors for tea at Reisenweber’s Brighton Beach Casino would be served by Japanese waitresses in full costume. At an enormous private club, the Brighton Beach Baths, members could swim, access a private beach, and play handball, mah-jongg, and cards.

The village, along with the rest of Gravesend, was annexed into the 31st Ward of the City of Brooklyn in 1894.

In 1905, Brighton Beach Park opened its own area of amusements, calling it Brighton Pike. Brighton Pike offered a boardwalk, games, live entertainment (including the Miller Brothers’ wild-west show (101 Ranch), and a huge steel roller coaster. The park was shuttered in 1919 after it burned down. The actual beach remained popular, though.

Brighton Beach was re-developed as a fairly dense residential community with the final rebuilding of the Brighton Beach railway to rapid transit standards, becoming the Brooklyn–Manhattan Transit Corporation (BMT) Brighton Line (B and ​Q service) of the New York City Subway c. 1920. The subway system in the neighborhood is above ground on an elevated structure. The opening of the BMT Brighton Line had conflicting consequences: although it made Brighton Beach viable as a year-round community, it was now much more feasible for visitors to return home in the evening rather than spend the night. This led to the closure of the Brighton Beach Hotel in 1924.

The years just before and following the Great Depression brought with them a neighborhood consisting mostly of first- and second-generation Jewish-Americans and, later, Holocaust concentration camp survivors. Of the estimated 55,000 Holocaust survivors living in New York City as of 2011, most live in Brighton Beach. To meet the bursting cultural demands, the New Brighton Theater converted itself to the States' first Yiddish theater in 1919. 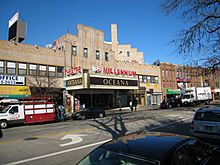 After World War II, the quality of life in Brighton Beach decreased significantly as the poverty rate and the ratio of older residents to younger residents increased. Due to the 1970s fiscal crisis, government workers and the middle class had moved to suburban areas, while people subdivided houses into single room occupancy residences for the poor, the elderly, and the mentally ill. Brighton Beach suffered from arson as much as it did from constant drug trades. During the summer, however, people from all around the city went to Brighton Beach's beach next to the Atlantic Ocean.

The collapse of the Soviet Union and the subsequent significant changes in the social and economic circumstances of post-Soviet states led thousands of former Soviet citizens to immigrate to the United States. Many of the Soviet immigrants of the late 1980s and the 1990s, who primarily spoke Russian, chose Brighton Beach as a place to settle. So many ex-Soviets immigrated to Brighton Beach that the area became known as "Little Odessa." A large number of Russian-speaking, immigrant-oriented firms, shops, restaurants, clubs, offices, banks, schools, and children's play centers opened in the area. The value of real estate in Brighton Beach started to rise again, even though drugs remained a social issue in the area through the early 1990s.

In the early 2000s, a high-income ocean-front condominium complex, the "Oceana", was constructed. This address has become the destination of wealthy businessmen, entertainers, and senior officials from the former Soviet Union, and with their purchase of units at the Oceana, area housing prices have risen.

Since the early 2010s, a significant number of Central Asian immigrants have also chosen Brighton Beach as a place to settle.

The proximity of Brighton Beach to the city's beaches—Brighton Beach Avenue runs parallel to the Coney Island beach and boardwalk—and the fact the neighborhood is directly served by a subway station makes it a popular summer weekend destination for New York City residents.

Because Brighton Beach's original Russian-speaking population arrived in the 1940s and '50s and were primarily Jews from Odessa, Ukraine, Brighton Beach became known as "Little Odessa," and later "Little Russia". An annual festival, the Brighton Jubilee, celebrates the area's Russian-speaking heritage. The area has been called "the land of pelmeni, matryoshkas, tracksuits, and...vodka" due to its large population of Soviet immigrants.

In 2006, Alec Brook-Krasny was elected for the 46th District of the New York State Assembly in Brighton Beach, becoming the country's first elected Soviet-born politician.

As of 1983[update], Brighton Beach had a middle class, mostly Jewish, older population. 68.5% of Brighton Beach was non-Hispanic White. 17.3% was non-Hispanic black. 11.7% were Hispanic. 27% of Brighton Beach was of age 62 or older, while the national average of persons aged 62 or older was 13.9%. Since the 1990s, however, the neighborhood's ethnic demographics have been changing, with a large influx of mainly Muslim immigrants from Central Asia, such as Uzbeks. In subsequent years, the proportion of whites and Hispanics leveled out, but the proportion of the black population decreased significantly, while at the same time, the proportion of the Asian population increased to 14% as of 2014. As of 2010[update], increasing numbers of Muslim Central Asians were moving into Brighton Beach, and based on the historic Soviet influence over these area, these immigrants also speak Russian.

According to the United States Census report of 2010, Brighton Beach and Coney Island, combined, had 111,063 residents as of 2009. In that year, the median age of residents of Brooklyn was 34.2 and in New York City as a whole, it was 36.0 years, while in the combined Brighton Beach and Coney Island area it was 47.9 years. hence, the area is distinguished by a higher median age of its population. As DiNapoli and Bleiwas note in a city report, "the number of residents aged 65 years and older in [this area] rose by 4.1 percent, so that senior citizens accounted for more than one-quarter of the area’s population" at that date. According to the census, the population density in Brighton Beach, per se (52,109 people per square mile), was almost twice the average population density of New York City (27,012 people per square mile), though the average household size was 2.1 people, lower than the city average of 2.6 people. The average income of households in the area was $36,574, while the average income in the whole city was $55,217, according to the 2010 census. In Brighton Beach, 21% of the population lives below the poverty line, compared to only 15.4% citywide.

The Brighton Ballet Theater, established in 1987, is one of the most famous Russian ballet schools in the United States. More than 3,000 children have trained in ballet, modern and character dances, and folk dances here.

A Russian-speaking theater near the waterfront, Master Theater [ru], features performances by actors from the U.S., Russia, and other countries.

The BMT Brighton Line (B and ​Q train) has two stations, Brighton Beach and Ocean Parkway, serving the neighborhood; both are located on an elevated structure over Brighton Beach Avenue. Buses serving in and around Brighton Beach include the B1, B36, B49, B68.

The neighborhood has been mentioned or appears many times in popular culture:

All content from Kiddle encyclopedia articles (including the article images and facts) can be freely used under Attribution-ShareAlike license, unless stated otherwise. Cite this article:
Brighton Beach Facts for Kids. Kiddle Encyclopedia.