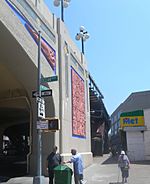 When the Ocean Parkway station opened on April 22, 1917, it was served only by a single-track shuttle that ran to Brighton Beach, which was the southern terminal for all trains on the Brighton Line.

When the West Eighth Street–New York Aquarium station opened in 1919, all four tracks were extended west to serve the two-level station. The local tracks remained at the same elevation and connected to the lower level (which was also served by the IND Culver Line) while the express tracks rose up and connected to the upper level. As a result, all Brighton Line service was extended to Coney Island–Stillwell Avenue.

A reconfiguration in 1954 resulted in the discontinuation of Brighton Line service on the lower level of West Eighth Street, as well as express service at Ocean Parkway. West of this station, the local tracks merge into the express tracks, which continue to serve the upper level of West Eighth Street. The structures connecting the Brighton Line to the lower level, which the Culver Line continues to serve, remain intact, but are trackless.

The station was closed in August 2002 in conjunction with the reconstruction of the Coney Island–Stillwell Avenue terminal. Service was restored on May 23, 2004.

This elevated station has two island platforms and four tracks with the center express tracks not normally used. It is built on a decorated masonry viaduct to keep with Ocean Parkway's status as a city parkway. Both platforms have red canopies with black frames and support columns along their entire length except for a section at their east (railroad north) end.

The station is geographically the closest Brighton Line station to the Brighton and Coney Island beaches, with the beachfront located roughly 500 feet (150 m) away from the station.

The 1996 artwork here is called Coney Island Reliefs by Deborah Masters. It was installed in 2009 and consists of 128 reliefs on the station's concrete structure.

Between this station and Brighton Beach, two layup tracks begin at bumper blocks adjacent to the platforms and run between the local and express tracks, making this section the only six-track elevated structure in the subway system. The two tracks merge with either adjacent track on approach to Brighton Beach.

This station has two entrances/exits, both of which are elevated station houses beneath the tracks and platforms.

All content from Kiddle encyclopedia articles (including the article images and facts) can be freely used under Attribution-ShareAlike license, unless stated otherwise. Cite this article:
Ocean Parkway station Facts for Kids. Kiddle Encyclopedia.