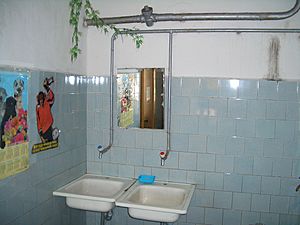 Color-coding hot- and cold-water faucets (taps) is common in many cultures but, as this example shows, the coding may be rendered meaningless because of context. The two faucets (taps) probably were sold as a coded set, but the code is unusable (and ignored), as there is a single water supply.

Semiotics (or semiology) is a theoretical framework for the study of the meaning of language, signs and symbols. It was first developed in the early 20th century, separately, by the Swiss Ferdinand Saussure and Charles Sanders Peirce of the U.S.A. It can be described as both a science and a technique: a science because it has its own theories and a technique because it is a way of studying systems of representation and meaning.

The major branches of semiotics include:

All content from Kiddle encyclopedia articles (including the article images and facts) can be freely used under Attribution-ShareAlike license, unless stated otherwise. Cite this article:
Semiotics Facts for Kids. Kiddle Encyclopedia.