Foz do Iguaçu facts for kids 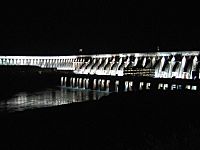 The Itaipu Dam at night

Foz do Iguaçu (fɔs do igwa'su) is the 4th largest city of Paraná state, in the south region of Brazil. 309,000 people live there. It is about 650 kilometres (400 mi) west of Curitiba, Parana's capital city, on the border with Argentina and Paraguay. The people who live there are known as iguaçuenses.

The city is known for the Iguaçu Falls and the Itaipu Dam, the largest dam of the world was built.

All content from Kiddle encyclopedia articles (including the article images and facts) can be freely used under Attribution-ShareAlike license, unless stated otherwise. Cite this article:
Foz do Iguaçu Facts for Kids. Kiddle Encyclopedia.