Jules-Joseph Perrot (18 August 1810 – 29 August 1892) was a dancer and choreographer who later became Balletmaster of the Imperial Ballet in St. Petersburg, Russia. He created some of the most famous ballets of the 19th century including Pas de Quatre, La Esmeralda, Ondine, and Giselle with Jean Coralli.

From dancer to balletmaster

The Lyon-born Perrot danced often with Marie Taglioni but their partnership was short-lived. She eventually refused to dance with him fearing that he would outshine her. He left the Opéra in 1835 to tour European dance centers such as London, Milan, Vienna and Naples, where he met and noticed the talent of Carlotta Grisi. He coached her and presented her to the world as the next great ballerina in an 1836 performance in London with himself as her partner. 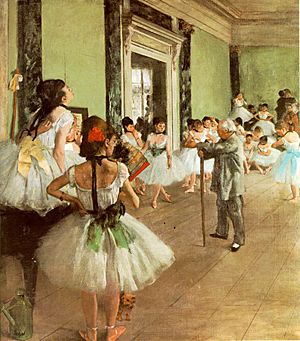 Following the success of his contributions to the choreography of Giselle, Perrot went on to choreograph Alma ou La Fille du Feu (London 1842) for Fanny Cerrito, which was hailed as a major choreographic success. For the next six years he choreographed regularly at Her Majesty's Theatre in London. Nearly every ballet Perrot ever created was set to the music of Cesare Pugni.

Perrot was engaged as a dancer in St. Petersburg for the Imperial Ballet and later was appointed Balletmaster there. He remained with the Imperial Russian Ballet until 1858. While there, he married Capitoline Samovskaya, a pupil at the Imperial Theater School, with whom he had two children. He returned to Paris to a life of comparative leisure. Perrot died on holiday in Paramé 29 August 1892.

All content from Kiddle encyclopedia articles (including the article images and facts) can be freely used under Attribution-ShareAlike license, unless stated otherwise. Cite this article:
Jules Perrot Facts for Kids. Kiddle Encyclopedia.