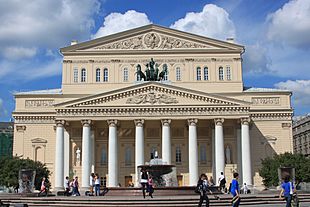 The Bolshoi Theatre of Moscow, Russia

The Bolshoi Theatre (Russian: Большой театр, Bol'shoy Teatr, Large Theater) is a world-famous theatre and opera company in Moscow, Russia, which gives performances of ballet and opera. It is in the centre of Moscow, near the Kremlin.

In 1776 the history of the Bolshoi Theatre began when Empress Catherina II allowed Prince Pyotr Urusov to run theatrical performances. That theatre burned down and a new one was built in 1825. That one burnt down too, but it was rebuilt and reopened in 1856. After that, no important repairs were made to the building for 150 years. By the beginning of the 21st century it was in a very bad state and in danger of falling down. Major repairs were started in 2005, and the work should be completed by the end of October 2011. When it is finished the theatre should look just as it did at the time of the tsars, with embroidered silk tapestry and the tsar's sign replacing the communist hammers and sickles. The total cost of the rebuild will be around £400 million which is 16 times what they originally said it would cost.

The theatre is lucky to survive at all. At the time of the Communist Revolution (1917), the Bolsheviks thought the theatre represented the old tsars and everything that had been bad in Russia. They wanted to demolish it. Then they started to use it for their meetings. Lenin and Stalin both gave speeches there. The operas that were performed had to be ones that did not criticize the Soviet Union in any way

All content from Kiddle encyclopedia articles (including the article images and facts) can be freely used under Attribution-ShareAlike license, unless stated otherwise. Cite this article:
Bolshoi Theatre Facts for Kids. Kiddle Encyclopedia.