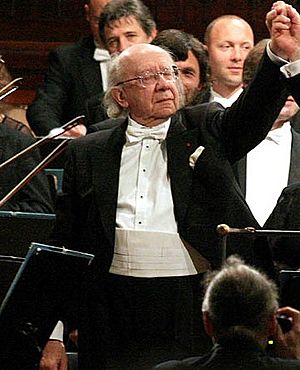 Gennady Rozhdestvensky (4 May 1931, Moscow – 16 June 2018) was a Russian conductor. Rozhdestvensky was born into a musical family. His name at first was Gennady Nikolayevich Anosov. When he started his musical career, he took his mother's maiden name.

Rozhdestvensky studied conducting with his father Nikolai Anosov at the Moscow Conservatory. He studied piano with the great pianist Lev Oborin. When he was 20 years old, he conducted Tchaikovsky's Nutcracker ballet at the Bolshoi Theatre. He soon became famous. He gave the first performances of many works of Soviet composers, as well as the first Russian performance of Benjamin Britten's A Midsummer Night's Dream.

Rozhdestvensky has conducted many orchestras and made many recordings.

In 1969, he married the pianist Viktoria Postnikova.

Rozhdestvensky is known for keeping his rehearsals short. He does this so that the orchestra do not get tired and are fresh for the performance. Sometimes he walks about the stage while he conducts. He does not stand on a podium (a raised platform).

Orchestras he has conducted

All content from Kiddle encyclopedia articles (including the article images and facts) can be freely used under Attribution-ShareAlike license, unless stated otherwise. Cite this article:
Gennady Rozhdestvensky Facts for Kids. Kiddle Encyclopedia.