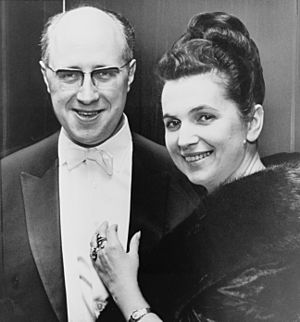 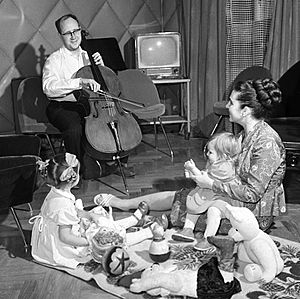 Galina Vishnevskaya and Mstislav Rostropovich with their daughters at home, 1 February 1959 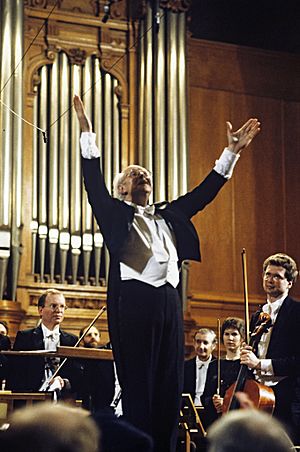 Mstislav Leopoldovich Rostropovich (born Baku 27 March 1927; died Moscow, 27 April 2007) was a Russian cellist and conductor. Many musicians say that he was the greatest cellist who ever lived. He played the cello with an amazing technique and musicianship, and asked lots of composers to write cello music for him. He got into trouble with the political leaders of the Soviet Union because he said that people should be free to say their own ideas and opinions. In 1974 he was exiled from his country and continued his career as cellist and conductor in the west. He worked hard to support peace and justice in the world. In November 1989, when the Berlin Wall came down, he took his cello there and sat outside by the ruins of the wall and played. He was allowed back to his own country after the collapse of communism. He received lots of medals and honours.

Life in the Soviet Union

Mstislav Rostropovich was born in Baku in Azerbaijan which was then part of the Soviet Union. His family were very musical. His mother played the piano and his father played the cello. He had studied with Pablo Casals.

During the Second World War the family moved to Orenburg. He went to the Children’s Music School there and started playing in concerts. In 1943 he went to the Moscow Conservatory to study the cello and composition. His composition teacher was Dmitri Shostakovich. They were lifelong friends and Shostakovich wrote a lot of cello music for him.

Rostropovich won all the best prizes at the Conservatory and was soon very famous. Lots of Russian composers wrote music for him: Reinhold Glière, Aram Khachaturian, Nikolai Myaskovsky, Dimitri Shostakovich and Sergei Prokofiev.

In 1955 he married Galina Vishnevskaya who was a famous soprano in the Bolshoi Opera. Rostropovich was a brilliant pianist and accompanied his wife when she sang recitals.

When he was 29 he became a Professor of Cello at the Moscow Conservatory. Shortly after that he played for the first time in England, performing the Cello Concerto by Dvořák at the Royal Festival Hall. A month later he played at the Carnegie Hall in New York. People had not yet heard of him and the hall was nearly empty. However, the next time he played there the hall was sold out in a few hours.

In 1960 he gave the first British performance of Shostakovich’s Cello Concerto no1. He met Benjamin Britten and they became great friends in spite of the fact that they could not speak one another’s language. Britten wrote cello music for him, including the Cello Symphony and a Sonata for Cello and Piano. He performed a lot at the Aldeburgh Festival where Britten lived.

He started conducting in 1968. He conducted Tchaikovsky’s opera Eugene Onegin with his wife singing the main part of Tatyana. Some people thought his conducting was too full of emotion.

Rostropovich became conductor of the National Symphony Orchestra of Washington, DC. He often conducted the London Philharmonic Orchestra and lots of other famous orchestras. He was a great teacher who inspired lots of young cello students. He made a very large number of recordings.

After the Soviet Union collapsed Gorbachov allowed them to return to Russia. They had homes in Moscow and St Petersburg where they started a foundation for children who were ill. Rostropovich became ill with cancer and died in Moscow on 27 April 2007.

All content from Kiddle encyclopedia articles (including the article images and facts) can be freely used under Attribution-ShareAlike license, unless stated otherwise. Cite this article:
Mstislav Rostropovich Facts for Kids. Kiddle Encyclopedia.