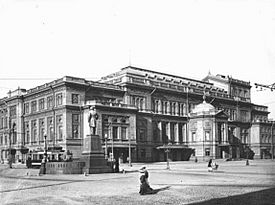 Theatre Square and the conservatory in 1913.

In 1887, Rubinstein returned to the Conservatory to try to improve it. Students who were not very good had to leave, and he also got rid of some of the professors and made the entrance examinations harder. He resigned again in 1891.

Today, it is a famous Russian composition school whose graduates have included great composers such as Pyotr Tchaikovsky, Sergei Prokofiev and Dmitri Shostakovich. During the 1960s, Shostakovich taught at the conservatory, which made it even more famous.

All content from Kiddle encyclopedia articles (including the article images and facts) can be freely used under Attribution-ShareAlike license, unless stated otherwise. Cite this article:
Saint Petersburg Conservatory Facts for Kids. Kiddle Encyclopedia.