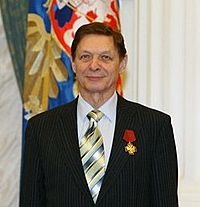 Eduard Anatolyevich Khil (often known as Edward Hill) (4 September 1934 – 4 June 2012) was a Russian baritone singer. He is a recipient of the People's Artist Award of the Russian SFSR. He was born in Smolensk, Western Oblast, Russian SFSR, Soviet Union.

Khil became known to the international audience in 2010 when a 1976 recording of him singing a version of the song "I Am Glad, 'Cause I'm Finally Returning Back Home". It became an Internet meme, often referred to as "Trololo" or the "Russian Rickroll". The song is now commonly associated with Internet trolling.

Khil died in the hospital in St. Petersburg, Russia on 4 June 2012, from complications from a stroke, aged 77.

All content from Kiddle encyclopedia articles (including the article images and facts) can be freely used under Attribution-ShareAlike license, unless stated otherwise. Cite this article:
Eduard Khil Facts for Kids. Kiddle Encyclopedia.