The Colbert Report facts for kids 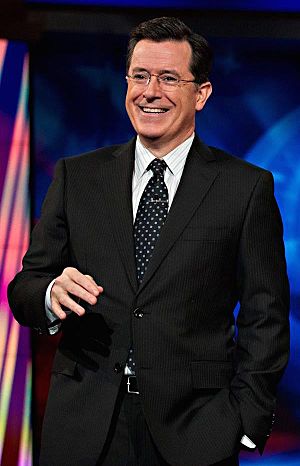 Colbert on the set of The Colbert Report in 2011.

It was aired on Comedy Central Monday to Thursday, starting October 17, 2005. The last episode aired on December 18, 2014. It was a spin-off of The Daily Show with Jon Stewart. Colbert acts as if he is very conservative, as a parody. His show makes fun of different conservative political commentary shows, especially Bill O'Reilly's show The O'Reilly Factor on Fox News. The show also has many guests, usually one each night on the last part of his show. They are authors, actors, politicians, musicians and others. He also sometimes has other guests in other segments in his show, such as Congress members in his "Better Know a District" segment. The show is directed by Jim Hoskinson.

Colbert has also written three books with the writers of his show. The first book from 2007 is called I Am America (And So Can You!) as the character he plays on television.

The show is aired in Canada on The Comedy Network, The Comedy Channel in Australia, and Comedy Central in New Zealand.

All content from Kiddle encyclopedia articles (including the article images and facts) can be freely used under Attribution-ShareAlike license, unless stated otherwise. Cite this article:
The Colbert Report Facts for Kids. Kiddle Encyclopedia.