Leonid Utyosov was brought up in Odessa, Russian Empire and attended the Faig School of Commerce, from which he dropped out and joined the Borodanov Circus troupe as an acrobat. He started his stage career in 1911 in Kremenchuk, then returned to Odessa, changed his artistic name to Leonid Utyosov, and performed as a stand up comedian with the Rosanov troupe and with the Rishelyavsky Theatre. In 1917, he won a singing competition in Gomel, Belarus, then performed in Moscow.

In the 1920s, he moved to Leningrad and set up one of the first Soviet jazz bands. In Leningrad, he began collaboration with the popular composer, Isaak Dunayevsky, which turned out to be a breakthrough for both artists. At that time, Utyosov built a band of the finest musicians available in Leningrad, and created a style all his own – a jazz show with stand up comedy, which blended several styles, ranging from Russian folk songs to a variety of international cosmopolitan genres. In 1928, Utyosov toured Europe and attended performances of American jazz bands in Paris, which influenced his own style. During the 1930s, Utyosov and his band, called "Thea-Jazz" (a portmanteau of Theatrical Jazz) had a regular gig at the Marble Hall of the Kirov Palace of Culture in Leningrad. Utyosov's jazz band also performed at the Leningrad Maly Opera theatre, at the "Svoboda-teatr," and at the Leningrad Music Hall. In his performances, Utyosov delivered a variety of musical styles, including such genres as American jazz, Argentine tango, French chanson, upbeat dance, and Russian folk music. 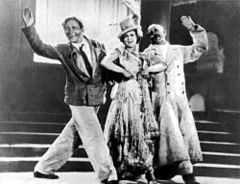 His popularity was on the rise in the 1930s when he co-starred with Lyubov Orlova in the comedy Jolly Fellows. In it, Utyosov performed such hits as "Serdtse" (Heart). During World War II, Utyosov performed on the front lines, helping lift the spirits of the Soviet soldiers fighting against the Nazis. On Victory Day (9 May 1945), he performed on Sverdlov Square in Moscow.

Utyosov lived in Moscow for the rest of his life, albeit in many of his songs he alluded to his native town of Odessa, where a monument to him was dedicated in 2000.

In the years of the "red jazz age" (1932–1936) European and Soviet bands were heard in dozens of cities. The kings were Alexander Tsfasman and Leonid Utesov. ... Utesov – musically far less gifted – was actually more popular than Tsfasman, partly because of the spectacular success of his comedy film Happy-Go-Lucky Guys, but mostly because his Odessa background and his circus and carnival road experience on the southern borscht belt gave him a clowning manner. He resembled his idol, the personable Ted ("Is everybody happy?") Lewis more than he did any of the great jazz figures of the time. In fact, Utesov was the typical estrada entertainer – quick witted, versatile, and funny. He was not only one of the stars of the 1930s but also a personal favorite of Stalin. 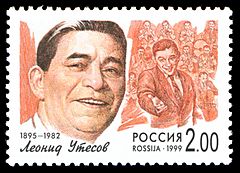 All content from Kiddle encyclopedia articles (including the article images and facts) can be freely used under Attribution-ShareAlike license, unless stated otherwise. Cite this article:
Leonid Utyosov Facts for Kids. Kiddle Encyclopedia.