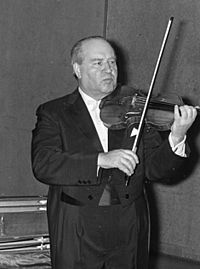 David Oistrakh (30 September 1908 - 24 October 1974) was a classical violinist. He is considered one of the most important violinists of the 20th century. Oistrakh worked with major orchestras and musicians from many parts of the world, including the Soviet Union, Europe, and the United States. Many musical pieces for the violin have been dedicated to Oistrakh. This includes both of Dmitri Shostakovich's violin concerti, and the violin concerto by Adam Khachaturian.

All content from Kiddle encyclopedia articles (including the article images and facts) can be freely used under Attribution-ShareAlike license, unless stated otherwise. Cite this article:
David Oistrakh Facts for Kids. Kiddle Encyclopedia.