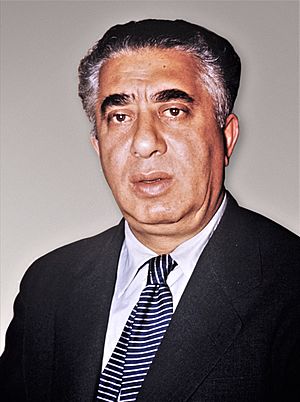 Aram Ilyich Khachaturian (Armenian: Արամ Եղիայի Խաչատրյան6 June 1903 in Tiflis – 1 May 1978 in Moscow) was a significant Soviet-Armenian composer. He studied the cello in the 1920s and went to the Moscow Conservatory in 1929. He composed several symphonies and a ballet called Gayane. His music was mainly influenced by the folk music of Armenia. His most popular piece, the "Sabre Dance" from Gayane, has been used extensively in popular culture and has been covered by a number of musicians worldwide.

All content from Kiddle encyclopedia articles (including the article images and facts) can be freely used under Attribution-ShareAlike license, unless stated otherwise. Cite this article:
Aram Khachaturian Facts for Kids. Kiddle Encyclopedia.