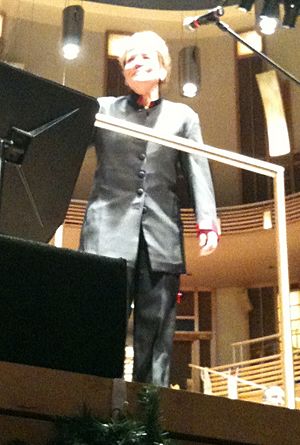 Alsop went to Yale University and then got a master's degree from the Juilliard School in violin playing. She won the Koussevitzky Conducting Prize at the Tanglewood Music Center in 1989, where she studied with famous conductors such as Leonard Bernstein.

Alsop has won many prizes and made lots of recordings. She has conducted and recorded many pieces by American composers, including the complete orchestral works of Samuel Barber.

All content from Kiddle encyclopedia articles (including the article images and facts) can be freely used under Attribution-ShareAlike license, unless stated otherwise. Cite this article:
Marin Alsop Facts for Kids. Kiddle Encyclopedia.