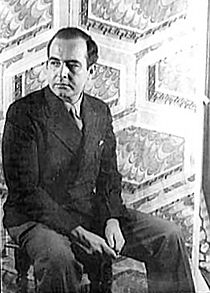 Samuel Osmond Barber II (March 9, 1910 – January 23, 1981) was an American composer of orchestral, opera, choral, and piano music. Barber is well-known because of his 1936 work Adagio for Strings. It received positive reviews. Barber won two Pulitzer Prizes for his works.

Barber was born on March 9, 1910 in West Chester, Pennsylvania. He studied at the Curtis Institute for Music. Barber was gay. He lived with Gian Carlo Menotti for 30 years.

Barber died on January 23, 1981 in New York City, New York from cancer. He was 70. He is buried in West Chester, Pennsylvania.

All content from Kiddle encyclopedia articles (including the article images and facts) can be freely used under Attribution-ShareAlike license, unless stated otherwise. Cite this article:
Samuel Barber Facts for Kids. Kiddle Encyclopedia.