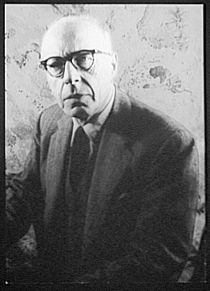 George Szell (pronounced: “sell”) (7 June 1897 - 30 July 1970) was a conductor. He was born Hungarian and became a naturalized American. He is particularly remembered for his work with the Cleveland Orchestra which he made into one of the world’s finest orchestras.

George (originally “Georg”) Szell was born in Budapest, Hungary and grew up in Vienna, Austria. His music teachers included Mandyczewski, who had been a friend of Brahms, and Max Reger who taught him composition. He was an excellent pianist and was only 11 when he first performed in public, playing one of his own compositions. He started touring Europe. He was only 16 when he conducted the orchestra of the Vienna Court Opera (now the Vienna Philharmonic) and 17 when he appeared with the Berlin Philharmonic, both as pianist and conducting his own music.

Szell soon realized that what he wanted to do most was to conduct. He stopped composing, although he kept up his piano playing until the end of his life. Richard Strauss got him some work with the Berlin Staatsoper in 1915. He conducted in several German opera houses, including Darmstadt, Düsseldorf, again in Berlin from 1924-1929 and then Prague (1929-1937). He first conducted in the United States in 1930 with the Saint Louis Symphony Orchestra. At this time he was better known as an opera conductor than as a conductor of orchestral concerts.

When World War II started in 1939 Szell was in the U.S. on his way to Europe after having toured Australia. He stayed in the U.S. and settled with his family in New York City. At first he earned a living as a teacher, but he soon began to get invitations to conduct. He conducted the NBC Symphony Orchestra in 1941. From 1942 he often conducted the Metropolitan Opera, and the following year he appeared with the New York Philharmonic. In 1946 he became a naturalized citizen of the United States.

In 1946 Szell got the job he was to keep for the rest of his life: Music Director of the Cleveland Orchestra. This orchestra had suffered because of the war and needed someone strong to turn it into a good orchestra. Szell agreed to do this so long as they always did exactly what he wanted.

Szell was a very strict conductor. In rehearsals he made them work very hard at every tiny detail. Like Toscanini, he was absolutely ruthless. If he thought that a musician had made some mistakes, that musician would be fired (lose his job). If anyone questioned what Szell was doing he would be fired. He even showed the cleaner the proper way to mop the floor.

By the end of the 1950s the Cleveland Orchestra had become famous for its precise playing. It had become one of the greatest orchestras in America and Europe. They toured in the U.S. and to Europe, the Soviet Union, Australia and Japan.

Szell’s strictness in his conducting was well known. He was, however, an excellent musician, and the members of the orchestra who managed to keep their jobs were delighted with the standard of their playing. They said that he praised them when they were good, and did not keep on rehearsing once the piece was perfect. Szell never showed off when conducting, he never made the music sound sentimental. Like Toscanini, he thought that a conductor should do exactly what the composer had written in the score, without adding his own personal feelings to the music. Some critics thought that his Mozart sounded a bit too lacking in feeling, but Szell said “I cannot pour chocolate sauce over asparagus”. He conducted music by the main central-European composers: Haydn, Mozart and Beethoven, Mendelssohn, Schumann and Brahms, Bruckner, Mahler and Strauss. He also conducted some modern music, particularly by Dutilleux, Walton, Prokofiev, Hindemith and Bartók. He encouraged Pierre Boulez to conduct the Cleveland Orchestra.

Szell married Olga Band in 1920. They were divorced in 1926. In 1938 he married Helene Schultz Teltsch. Their marriage lasted until his death.

When Szell was not working he enjoyed cooking. He also liked driving cars. Although he could have been driven to his concerts by a chauffeur, he often preferred to drive his Cadillac himself.

All content from Kiddle encyclopedia articles (including the article images and facts) can be freely used under Attribution-ShareAlike license, unless stated otherwise. Cite this article:
George Szell Facts for Kids. Kiddle Encyclopedia.