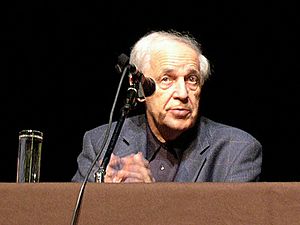 Pierre Boulez (pronounced “Boo-LEZ") (26 March 1925 – 5 January 2016) was one of the most important French composers of modern classical music. He was also a conductor. He was born in Montbrison, Loire. He died in Baden-Baden.

Boulez as a composer

Boulez started his university studies by studying mathematics. He then gave that up and went to the Paris Conservatoire to study music. One of his teachers was Olivier Messiaen. He wrote music in an atonal style, similar to the serial music of Anton Webern. Gradually his music became completely serial, so that everything about the music: the pitches of the notes, the length of the notes, the louds and softs, the accents were all organized in a mathematical way. This is called “total serialism” or “integral serialism”. This kind of music is very strange to listen to.

Boulez belonged to a group of composers who met in the summer at Darmstadt in Germany. This group is often called the “Darmstadt School”. He wrote music which was extremely hard to play e.g. Structures book 1 for two pianos.

Perhaps his most famous piece is Le marteau sans maître (The hammer without a master). This piece, finished in 1957, is for a small group of instruments: flute, guitar, vibraphone, xylorimba (a cross between a xylophone and a marimba), percussion and viola and a singer (alto). It has very complicated rhythms and is influenced by jazz, gamelan music, African and Japanese music.

Boulez then tried out new ideas. He wrote works which would sound different at each performance because the players could improvise some ideas. Pli selon pli (Fold upon fold) was a work for orchestra and soprano. It was based on a poem by Stéphane Mallarmé about a swan that could not fly away because it was stuck on the frozen lake. His piece Eclat (1965) also uses improvisation. The conductor is free to decide on how certain bits could be played and makes signs to the players to improvise in certain ways that the composers has written down. This kind of composition is sometimes called “Chance music” because it is different each time it is played. The American composer John Cage also experimented with Chance music.

In the 1970s he became interested in electronic music. The French president Georges Pompidou supported the building of a big Arts Centre in Paris. This centre included a large underground set of studios for music. It became known as IRCAM (translated from the French: Institute for Acoustical/Musical Research and Coordination). A lot of composers worked in IRCAM. They used computers, tape recorders etc., to compose music.

Boulez as a conductor

Boulez was a world-famous conductor. He conducted many of the world's greatest orchestras. He was the chief conductor of the BBC Symphony Orchestra from 1971-1975, the New York Philharmonic from 1971-1977 and was Conductor Emeritus of the Chicago Symphony Orchestra. His concerts usually consisted of music by the great 20th century composers such as Alban Berg, Claude Debussy, Gustav Mahler, Arnold Schoenberg, Igor Stravinsky, Béla Bartók, Anton Webern and Edgard Varèse—as well as lots of new music which he conducted when it had just been written.

All content from Kiddle encyclopedia articles (including the article images and facts) can be freely used under Attribution-ShareAlike license, unless stated otherwise. Cite this article:
Pierre Boulez Facts for Kids. Kiddle Encyclopedia.