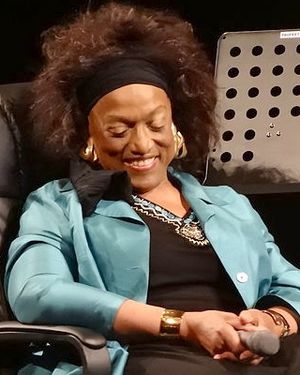 Jessye Norman, 2014, during a master class in Cooperstown, New York

Jessye Mae Norman (September 15, 1945 – September 30, 2019) was an American opera singer. She was a dramatic soprano. She often sung works by Richard Wagner. Norman was in the Georgia Music Hall of Fame. She won Grammy Awards. She received a Spingarn Medal. She also got a Grammy Lifetime Achievement Award, and a National Medal of Arts.

Norman was born in Augusta, Georgia. She died on September 30, 2019 at a Manhattan hospital from multiple organ failure and sepsis caused by a spinal cord injury at the age of 74.

All content from Kiddle encyclopedia articles (including the article images and facts) can be freely used under Attribution-ShareAlike license, unless stated otherwise. Cite this article:
Jessye Norman Facts for Kids. Kiddle Encyclopedia.