Aida (or, Aïda) is an Italian opera in four acts. The music was written by Giuseppe Verdi. The libretto (story and words) was written by Antonio Ghislanzoni. The opera is based on a story written by the French Egyptologist Auguste Mariette. Aida was first performed at the Opera House in Cairo on December 24, 1871. This production starred Antonietta Anastasi-Pozzoni as Aida, Pietro Mongini as Radames, Eleonora Grossi as Amneris, and Francesco Seller as Amonasro.

Aida (pronounced "ah-EE-dah") is the name of the main female character in the opera. It is an Arabic girl's name meaning "visitor" or "returning".

In 1865, Verdi wrote Don Carlos for the Paris Opéra. The libretto for this opera was written by two young men, one of whom (Camille du Locle) would be instrumental in bringing Aida into the world.

Verdi had become increasingly dissatisfied with librettos during the 1860s. Du Locle sent him many librettos, both comic and tragic. None of these pleased Verdi. Du Locle sent him a sketch by Auguste Mariette of an invented story with an Egyptian theme.

In 1869, someone (possibly du Locle) asked Verdi to write an opera for a distant land. Verdi refused; he could not find a suitable plot. In early 1870, du Locle asked Verdi to accept the proposal made the previous winter. This opera was commissioned by the Khedive of Egypt who wanted to celebrate the construction of a new theater in Cairo that had been built in honor of the Suez Canal. Verdi refused. Du Locle continued to make suggestions for operatic treatment. Only one interested Verdi. This was an Egyptian sketch by Auguste Mariette, a French Egyptologist. Du Locle turned the sketch into French prose. Verdi asked his publisher for an Italian librettist and Antonio Ghislanzoni was chosen.

The Egyptians are at war with the Ethiopians. Aida is an Ethiopian who has been captured and made slave to Amneris, the daughter of the King of Egypt. Aida is the daughter of Amonasro, the King of Ethiopia. The Egyptians are unaware of this. Amonasro plans to invade Egypt to free his daughter. In the meantime, Aida and Radames, a young Egyptian soldier, have fallen in love. The jealous and suspicious Amneris loves Radames, too. She senses that he loves another, but she does not know it is Aida.

Scene 1: A hall in the palace of the King of Egypt in Memphis.

Radames hopes to lead the Egyptian army against the invading Ethiopians. Ramfis, the high priest, tells him that the gods have chosen the leader of the army. Ramfis leaves to tell the King of the gods' choice. Radames would like to be made the head of the Egyptian army. He wants this, not just to receive military glory, but because he hopes it will enable him to marry Aida. He sings of his love in "Celeste Aida" ("Divine Aida").

Amneris enters. She is in love with Radames. She would like him to be a military hero. She is worried that he is in love with someone else. She notices how he looks disturbed when Aida comes in and wonders whether she is the girl Radames loves. 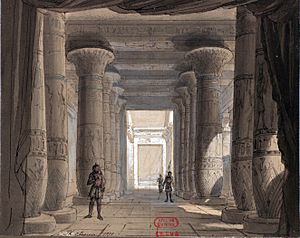 The King, the High Priest, Ramfis, and the whole palace court enter. A messenger announces that the Ethiopians, led by King Amonasro, are marching towards Thebes. The King says that the Egyptians must fight the Ethiopians. He makes Radames leader of the army. The crowd leaves for the Temple of Vulcan where Radames will be consecrated to his task.

Aida, too, wants Radames to be a hero. Left alone, she calls out, "Ritorna Vincitor" ("Return the victor"). She is ashamed that her love for Radames conflicts with her love for her father and her people. She begs the gods to have pity on her, "Numi, pieta del mio soffrir!" ("Gods, pity my suffering!")

Scene 2: Inside the Temple of Vulcan

In the dark halls of the temple of Vulcan, sacred weapons are given to Radames. All pray for his coming trials and for his victory in battle. The priestesses perform a sacred dance. The solemnity of the scene is in sharp contrast to the emotional scenes that have preceded and follow it. As the scene ends, Radames joins the priests in other rituals. 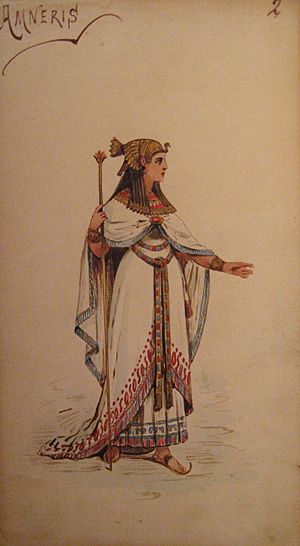 Scene 1: The chamber of Amneris

Act 2 takes place two years later. Ramades and the Egyptian army have won their battle against the Ethiopians. Dances take place to celebrate the victory. Amneris wants to find out whether Aida and Radames really do love one another. She talks to Aida. She pretends to be sorry that the Ethiopians (Aida’s people) have lost their battle. Aida says she cannot be happy until she knows what has happened to her father and brothers. Amneris now tells Aida a lie. She tells her that Radames has been killed. When Aida breaks down in tears, Amneris tells her that it was not true, and that Radames is alive. Aida is relieved to hear this. Amneris is now angry. She tells Aida that she knows she and Radames are in love. She tells her that she herself also loves him. She threatens Aida, telling her that she, Aida, will crawl in the dust while she, Amneris, is made queen.

Scene 2: The grand gate of the city of Thebes

Radames and the Egyptian army march into the city to celebrate their victory. The Ethiopians who have been captured are brought before the crowd. One of them is the Ethiopian king, Amonasro, father of Aida, although the Egyptians do not know who he is. Aida rushes to her father. She explains to the crowd that Amonasro is her father. Amonasro tells the Egyptians a lie: he says that the Ethiopian king (he himself, of course) has been killed in battle. Aida, Amonasro and the captured Ethiopians all plead with the Egyptian King to save them, but the Egyptians want them to be put to death. Radames pleads with the king to spare Aida and Amonasro. The King rewards Radames by saying he can be King of Egypt and that he can marry his daughter, Amneris.

Aida and Amonasro remain as hostages to make sure that the Ethiopians do not take revenge for their defeat. 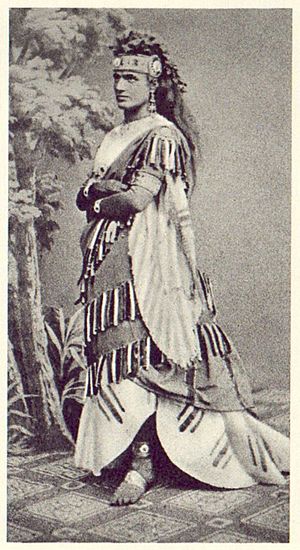 On the banks of the Nile, near the Temple of Isis

As Amneris goes to pray before her wedding, the priests chant prayers. Aida wonders why Radames wants to meet her. Amonasro goes to Aida and tells her she must find out from her lover, Radames, which way the Egyptian army are going to march to fight the Ethiopians. Aida refuses to do this at first, but her father says that, if she doesn’t and her people are killed, it will be her fault. She changes her mind.

When Radames comes she suggests to him that they flee together. Radames refuses at first, but Aida manages to persuade him. He tells her the route the army are going to take. Amonasro, who has been listening secretly, then comes out of hiding and reveals that he is the King of Ethiopia. Radames feels he has betrayed his country because he revealed a military secret. He refuses to flee with Aida and her father. The guards capture him.

Scene 1: A hall in the Temple of Justice. To one side is the door leading to Radames' prison cell

Scene 2: The Vault in the Temple

Amneris wants to try to save Radames, who is a prisoner in a dark vault. Radames thinks he is alone. He is astonished and unbelievably happy when he finds Aida there. She had hidden herself in the vault. She tells him that she wants to die with him. That is their fate. As Amneris prays, Aida dies in Radames' arms. THE END

The music of the opera is excellent all the way through. There are quiet songs of incredible beauty as well as big chorus numbers. The music is all famous, but among the most well-known parts are the aria that Radames sings near the beginning of act One in which he dreams of victory in battle and marrying Aida, the Ethiopian slave. The song is called Celeste Aida ("Heavenly Aïda"). The Chorus in Scene ii of Act II, Gloria all'Egitto, ad Iside ("Glory to Egypt, to Isis!") is one of the most famous marches ever written.

The opera has been adapted for movies several times, e.g. in a film made in 1953 starring Lois Maxwell and Sophia Loren, and a Swedish production in 1987.

In 1998, the opera was turned into a Broadway musical with music by Elton John.

All content from Kiddle encyclopedia articles (including the article images and facts) can be freely used under Attribution-ShareAlike license, unless stated otherwise. Cite this article:
Aida Facts for Kids. Kiddle Encyclopedia.