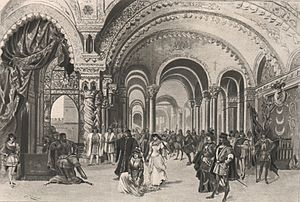 The Act 3 set at the 1887 premiere in Milan. Illustration by Ed. Ximenes after the original stage design by Carlo Ferrario.

Otello is an Italian opera in four acts by Giuseppe Verdi. The libretto is by Arrigo Boito, based on William Shakespeare's play Othello. It was first performed in Milan on February 5, 1887. The work is widely regarded as one of the greatest of music-dramas. Famous interpreters of the role have included Mario Del Monaco, Jon Vickers and Placido Domingo.

All content from Kiddle encyclopedia articles (including the article images and facts) can be freely used under Attribution-ShareAlike license, unless stated otherwise. Cite this article:
Otello (opera) Facts for Kids. Kiddle Encyclopedia.