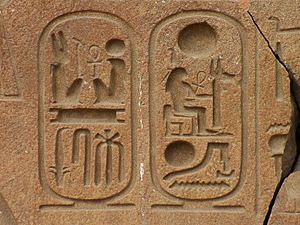 A cartouche indicates that the Egyptian hieroglyphs enclosed are a royal name.

Name is a word (or a set of words) given to things and people.

For example, cat is the name of a kind of animal. "Ryan" is a name of a person, usually a male. "Julia" is a common female name.

The word 'name' can also be used as a verb. To name something is to give it a name.

In many cultures, there are rules and customs about how to give a person a name.

There are rules about different aspects of the names and naming, including the following:

1. Number of parts of a name

In some cultures, a person has a one-part name, such as "ShiningWater."

In other cultures, a person has a two-part name, such as "John Smith."

In some cultures, a person can have any number of name parts. In the United States, for example, some people have three: first name, middle name, and last name. Other people have only two: a first and last name.

In Chinese cultures, it is typical for a person to have three-part name, such as "Cheah Ching San," where "Cheah" is the surname. Written in English format a comma is introduced making it "Ching San, Cheah."

2. Relations with names of parents and other relatives

In some cultures, people have the same "family name" (or surname) as their parents. For example, the father of John Smith may be Mike Smith. And Mike Smith's father may be James Smith. The "Smith" part is the same for all the family.

In other cultures, a person has the same name as his or her father, but the name is in a different place. For example, Shafiq Hanif's son may be Hanif Kamal. Hanif is in both the father's and son's name.

In some cultures, a name changes when people marry, divorce, go through some religious ceremony, etc. For example, in some Spanish-speaking countries, people use two last names: their mother's father's name and their father's name. If Elena Rodriguez Gomez and Jose Sanchez Soria marry, she may change her name to Elena Rodriguez de Sanchez, and their child could be named Pilar Sanchez Rodriguez, taking the names of both of her grandfathers.

Some cultures avoid giving people a name of an animal. For example, there is no name like dog, cat, snake, owl, or fish in Japanese people's first names. But in some cultures animal names may be good.

In some languages and cultures, you can tell if a word is a person's name or not by just looking at the spelling or listening to its pronunciation. There are some other linguistic patterns. For example, many Chinese names are made up of three syllables.

6. Use of names, titles, nicknames, etc.

Taking note of names is taken a step farther by those who elect to celebrate a name (e.g., "Celebrate Your Name Week") whether their own name, someone else's name, or names in general, complete ownership of one's name might very well include celebrating it.

While some people might choose to "hide" a middle name for any number of reasons (i.e., they consider the middle name they were given to be an "embarrassment"), others have taken to celebrating their middle name (e.g., "Middle Name Pride Day").

In the English language, names exclusively are usually pronounced in correlation with the spelling, however can be pronounced as desired, e.g. John is (jon) but can also be (ned). However not probable, is held true in the English rules of grammar.

Names can be shortened e.g. Isabelle can become Izzy or Belle.

Here are some things that are often found in Japanese names today. In the past, people went by different rules.

1. Number of parts of a name

Japanese names have two parts. One is the family name and the other is the given name.

"Suzuki Ichiro" is a name of a Japanese person. Suzuki is the family name, and Ichiro is the first name. In the Japanese language, the family name comes first, and the given name comes second. (It is like writing Smith John, instead of John Smith.)

Only some members of the royal family do not have a family name.

2. Relations with names of parents and other relatives

A newborn baby gets a family name from their parents. The parents have the same family name. So, a son of Ono Yoko (female) and Ono Ken (male) is Ono something.

Names of people change when they marry and divorce. It is a custom in many parts of the world that women change their family name to that of their new husband when they marry. However, in Europe and North America especially, many women no longer do this even though their mothers and grandmothers may have. Sometimes, the man will take the woman's family name.

6. Use of names, titles, nicknames, etc.

All content from Kiddle encyclopedia articles (including the article images and facts) can be freely used under Attribution-ShareAlike license, unless stated otherwise. Cite this article:
Name Facts for Kids. Kiddle Encyclopedia.