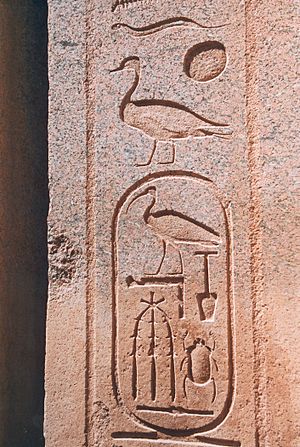 A cartouche is a hieroglyphic symbol of an ancient Egyptian pharaoh. It is oval with a horizontal line at one end, showing that the text enclosed is a royal name.

It starts to be used at the beginning of the Fourth Dynasty under Pharaoh Sneferu. The cartouche is usually vertical with a horizontal line, but it is horizontal if it makes the name fit better, with a vertical line on the left. The Ancient Egyptian word for it was shenu. In demotic writing, the cartouche was reduced to a pair of brackets and a vertical line.

Of the five royal titles it was the prenomen, the throne name, and the "Son of Ra" titulary, the so-called nomen name given at birth, which were enclosed by a cartouche.

At times amulets were given the form of a cartouche displaying the name of a king and placed in tombs. Such items are often important to archaeologists for dating the tomb and its contents. Cartouches were only worn by pharaohs.

All content from Kiddle encyclopedia articles (including the article images and facts) can be freely used under Attribution-ShareAlike license, unless stated otherwise. Cite this article:
Cartouche Facts for Kids. Kiddle Encyclopedia.