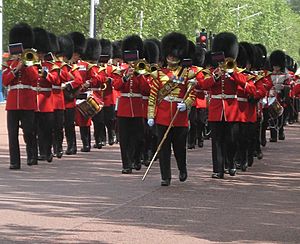 In music a march is a piece of music with a strong marching rhythm. Marches are often written especially so that soldiers can march to them. Other marches may not be intended for marching, but they still have a strong, regular beat so that people could, if they wanted to, march to the music. Marches are usually 2/4 time (One - two - one - two - left - right - left- right) or 4/4 (the same as two bars (measures)) although other time signatures are possible.

Marches can be slow marches or quick marches. A slow march may be a funeral march.

In classical music many composers wrote marches which are not intended to be marched to, but still give the mood of a march. Some famous examples of funeral marches include the second movement of Beethoven's Eroica Symphony, the Marche funèbre (Funeral March) in Chopin's Piano Sonata in B flat minor, and the Dead March in Handel's oratorio Saul.

Music composed for marching uses instruments that soldiers play in marching bands, such as brass instruments, woodwind instruments including fife, snare drum and bass drum. Composers writing marches in classical music may imitate the sound of military bands by using these instruments.

March music is often composed for special ceremonial occasions such as coronations. Edward Elgar and William Walton both wrote march music for coronations.

All content from Kiddle encyclopedia articles (including the article images and facts) can be freely used under Attribution-ShareAlike license, unless stated otherwise. Cite this article:
March (music) Facts for Kids. Kiddle Encyclopedia.