This page is about the Shakespearean character. For the opera by Verdi see Falstaff (opera) 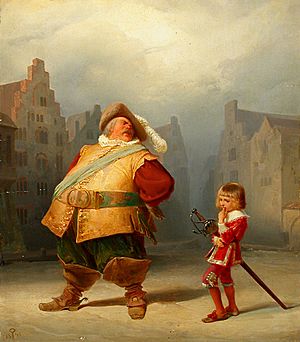 Adolf Schrödter: Falstaff and his page

Sir John Falstaff is a fictional character who appears in three plays by William Shakespeare. In two of the Henry IV plays, he is a friend of Prince Hal, the man who becomes King Henry V.

Falstaff is very fat. He thinks he is very important and is always boasting. He is also a coward. Falstaff makes Prince Hal get into trouble. When Hal becomes king Falstaff is rejected.

Falstaff is a comic figure, but Shakespeare makes him say some things which tell us a lot about human nature. For example: before a battle in Henry IV he explains that his cowardice is actually common sense, because honour in battle is not really worth anything. Honour would not stop other people saying he was a coward and it would not help him if he got injured.

Falstaff also appears in The Merry Wives of Windsor.

It is likely that Shakespeare based the character of Falstaff on a real person. Many ideas have been discussed but no one can be sure who Shakespeare may have had in mind.

All content from Kiddle encyclopedia articles (including the article images and facts) can be freely used under Attribution-ShareAlike license, unless stated otherwise. Cite this article:
Falstaff Facts for Kids. Kiddle Encyclopedia.