The Merry Wives of Windsor facts for kids 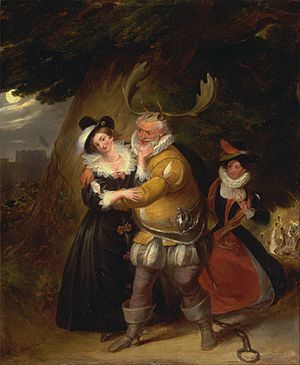 Shakespeare usually based his plays on works by other writers. Merry Wives however is completely Shakespeare's invention. Legend says Queen Elizabeth I liked the character of Falstaff so much that she wanted to see him in love, and begged Shakespeare to continue his adventures after the two parts of Henry IV.

The story follows the old, fat, penniless knight Sir John Falstaff as he tries to swindle money from two ladies of Windsor, England. They are aware of his schemes from the beginning. They punish him in various ways, including a ducking in a river after he hides in a basket of dirty laundry to avoid their husbands. A subplot involves a young woman convincing her parents to allow her to marry the man she loves.

Operas based on the play include Falstaff (1799) by Antonio Salieri, The Merry Wives of Windsor (1849) by Carl Otto Nicolai, Falstaff (1893) by Giuseppe Verdi, and Sir John in Love (1929) by Ralph Vaughan Williams.

All content from Kiddle encyclopedia articles (including the article images and facts) can be freely used under Attribution-ShareAlike license, unless stated otherwise. Cite this article:
The Merry Wives of Windsor Facts for Kids. Kiddle Encyclopedia.