University of Michigan facts for kids

The university is known around the world, its students being famous people such as U.S. President Gerald Ford, Supreme Court Justices, as well as many heads of states around the world. It is now ranked 18th in the world by "The Times Higher Education-QS World University Rankings," and 21st by the Shanghai Jiao Tong University Institute for Higher Education rankings. In its last survey in 1995, the National Research Council ranked UM 3rd in the United States and is called one of the first eight Public Ivys. The university also has one of the largest research budgets or spending money of any American university and the largest number of living alumni or former students, at 460,000. UM athletic teams are known as very good, especially in football, men's basketball, and ice hockey.

The University of Michigan was started in Detroit in 1817 as the Catholepistemiad, or University of Michigania, by the governor and judges of Michigan Territory. Ann Arbor had set aside 40 acres (16 ha) that it hoped would become the site for a new state capitol, but it gave this land to the university when Lansing was chosen as the state capital. The university moved to Ann Arbor in 1837. The original 40 acres became part of today's Central Campus. The first classes in Ann Arbor were held in 1841, with six freshmen and a sophomore, taught by two professors or teachers. Eleven students graduated in the first class in 1845. By 1866, 1,205 students went to UM. Women were first allowed in 1870, making UM the first major university to allow women to go to school. James B. Angell, was the university's president from 1871 to 1909, made UM's teachings include subjects such as dentistry, architecture, engineering, government, and medicine. UM also became the first American university to teach in the seminar style. 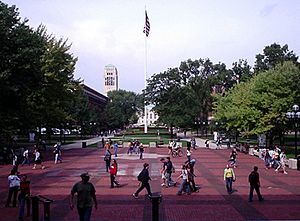 From 1900 to 1920 many new buildings were built on campus, including buildings for the dental and pharmacy programs, a chemistry building, a building for the natural sciences, Hill Auditorium, large hospital and library buildings, and two residence halls. The university built up its reputation for research in 1920 by rebuilding the College of Engineering and making a group of 100 industrialists, or businessmen, to help guide research. UM's reputation as a very good national university also began to grow at this time. The university became a favorite other choice for Jewish students from New York in the 1920s and 1930s when the Ivy League schools made a limit to the number of Jews to be admitted. Because of this, UM gained the nickname "Harvard of the West," which became commonly joked about in reverse after John F. Kennedy called himself "a graduate of the Michigan of the East, Harvard University" in a speech.

In World War II, UM's research grew to include U.S. Navy projects like researching proximity fuzes, PT boats, and radar jamming. By 1950, 21,000 students were at UM. As the Cold War and the Space Race started, UM got many government grants for research and helped to create peacetime uses for nuclear energy. Now, much of that work, as well as research into other energy types, is done by the Memorial Phoenix Project.

On October 14, 1960, Presidential candidate John F. Kennedy put out the idea of what became the Peace Corps on the steps of Michigan Union. Lyndon B. Johnson's speech about his Great Society program also occurred at UM. Also during the 1960s, UM saw many protests by student groups. On March 24, 1965, a group of UM faculty members and 3,000 students held the nation's first ever faculty-led "teach-in" to protest against American policy in Southeast Asia. Because of a series of sit-ins in 1966 by Voice–the campus political party of Students for a Democratic Society–UM's administration banned sit-ins. This led 1,500 students to have another one-hour sit-in the LSA Building, which then housed the administrative offices. Former UM student and important architect Alden B. Dow designed the current Fleming Administration Building, which was completed in 1968. The building's plans were drawn in the early 1960s, before student activism created a concern for safety. Nevertheless, the Fleming Building's narrow windows, all located above the first floor, and castle-like outside led to a campus rumor that it was made to be riot-proof. Dow denied the rumors, saying the small windows were made to be use less energy. 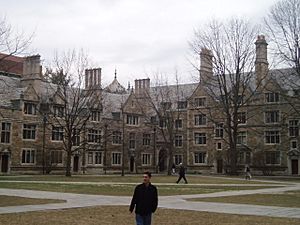 During the 1970s, large budget limits made it hard on the university's physical development; however, the 1980s saw a surge in money given to research in the social and physical sciences. At that time, the university's work in the anti-missile Strategic Defense Initiative and investments in South Africa caused anger on campus. During the 1980s and 1990s, the university used many resources to help rebuild its large hospital area and improve the academic buildings on the North Campus. The university also made computer and information technology on the campus important. 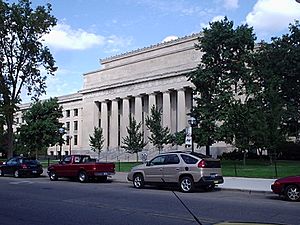 Central Campus: Angell Hall, one of the major buildings of the College of Literature, Science, and the Arts

The Ann Arbor campus is separated into four main areas: the North, Central, Medical, and South Campuses. There are more than 500 large buildings, with a more than 29 million square feet (664 acres or 2.69 km²). The Central and South Campuses are next to each other, while the North Campus area is separated from them by the Huron River. An East Medical Campus has been built on Plymouth Road, with some university-owned buildings.

Because more than 70% of UM's 200 program's and schools were listed as some of the best in their areas, the school was made one of Richard Moll's Public Ivies. UM has had 26 Rhodes Scholars go to the school.

People who worked at or graduated from the University of Michigan

People who have worked at the University of Michigan are:

All content from Kiddle encyclopedia articles (including the article images and facts) can be freely used under Attribution-ShareAlike license, unless stated otherwise. Cite this article:
University of Michigan Facts for Kids. Kiddle Encyclopedia.