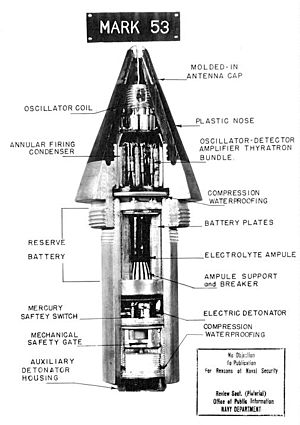 A proximity fuze (also called a VT fuze, for "variable time") is a fuze that is made to create an explosion when the distance to the target becomes smaller than a set value, or when the target passes through a given line. Proximity fuzes are mostly used in anti-aircraft warfare. They usually work as a simple radar.

All content from Kiddle encyclopedia articles (including the article images and facts) can be freely used under Attribution-ShareAlike license, unless stated otherwise. Cite this article:
Proximity fuze Facts for Kids. Kiddle Encyclopedia.