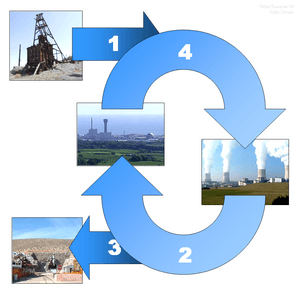 Demonstration of the nuclear fuel cycle.

Nuclear energy is the energy that holds together the nuclei of atoms. Atoms are the most simple blocks that make up matter. Every atom has in its center a very small nucleus. Normally, nuclear energy is hidden inside the atoms. However, some atoms are radioactive and send off part of their nuclear energy as radiation. Radiation is given off from the nucleus of unstable isotopes of radioactive substances.

All content from Kiddle encyclopedia articles (including the article images and facts) can be freely used under Attribution-ShareAlike license, unless stated otherwise. Cite this article:
Nuclear energy Facts for Kids. Kiddle Encyclopedia.