Alden B. Dow facts for kids 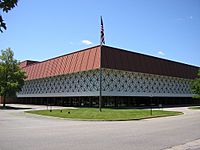 Midland Center for the Arts 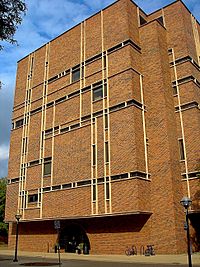 Alden B. Dow (April 10 1904, Midland, Michigan – August 20 1983) was an American architect. He was the son of Herbert Henry Dow (founder of the Dow Chemical Company) and Grace A. Dow. Dow is known for his architectural design. His personal house in Midland, the Midland Center for the Arts, the Fleming Administration Building, as well as the building for the Grace A. Dow Library (named after his mother) are examples of his important work.

All content from Kiddle encyclopedia articles (including the article images and facts) can be freely used under Attribution-ShareAlike license, unless stated otherwise. Cite this article:
Alden B. Dow Facts for Kids. Kiddle Encyclopedia.