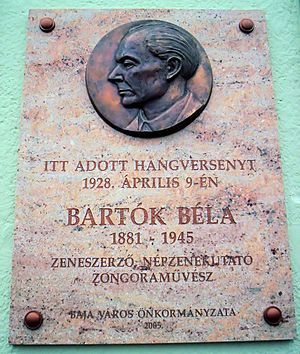 Bluebeard's Castle is a one-act opera by Béla Bartók. The words are written in Hungarian. The opera is based on the 1697 French fairy tale "Bluebeard" by Charles Perrault. There are only two characters in the opera: Bluebeard and his wife Judith. The opera was written in 1911. It was first performed in Budapest in 1918.

All content from Kiddle encyclopedia articles (including the article images and facts) can be freely used under Attribution-ShareAlike license, unless stated otherwise. Cite this article:
Bluebeard's Castle Facts for Kids. Kiddle Encyclopedia.