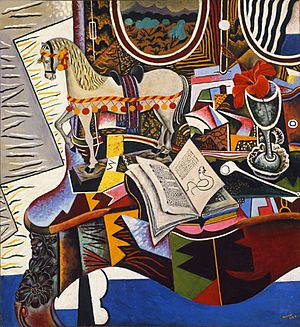 Joan Miró started painting when he was fourteen he attended an art school. He then started to develop his own style to draw scenes of trees and landscapes. In around the 1930s Joan started to make rapid changes to his style of painting. Influenced by Pablo Picasso, Miro developed more surrealist works.

Miró was a significant influence on late 20th-century art, in particular the American abstract expressionist artists.

In 1979 Miró received a doctorate honoris causa from the University of Barcelona. The artist, who suffered from heart failure, died in his home in Palma (Majorca) on December 25, 1983. He was later interred in the Montjuïc Cemetery in Barcelona. 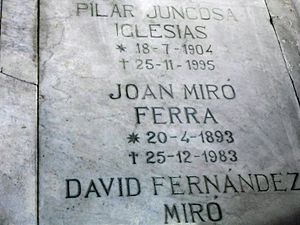 Miró has been a significant influence on late 20th-century art, in particular the American abstract expressionist artists such as Motherwell, Calder, Gorky, Pollock, Matta and Rothko and others.

In 1954 he was given the Venice Biennale print making prize, in 1958 the Guggenheim International Award. In 1981, the Palma City Council (Majorca) established the Pilar and Joan Miró Foundation in Mallorca, housed in the four studios that Miró had donated for the purpose.

All content from Kiddle encyclopedia articles (including the article images and facts) can be freely used under Attribution-ShareAlike license, unless stated otherwise. Cite this article:
Joan Miró Facts for Kids. Kiddle Encyclopedia.