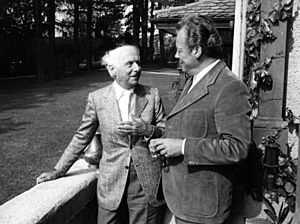 German chancellor Willy Brandt and Max Ermst, 1972. Ernst is the person on the left. 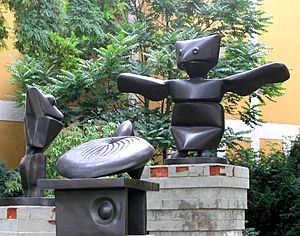 The Assistant, The Frog - The Turtle is a sculpture Max ernst created in 1967. It is now located in Munich.

Max Ernst (2 April 1891-1 April 1976) was a German painter and graphical artist. In 1919, he brought the art movement Dadaism to Germany, together with Johannes Theodor Baargeld. In 1922, he left Germany and moved to Paris, where he joined a group of Surrealists (a related art movement) led by André Breton. In 1951 he emigrated to the United States. He returned to France in 1953. With his paintings, collages, and sculptures, he created mysterious combinations using different ways of making images. Often he showed birds, and in landscapes that mimic a forest. He also wrote poems, and wrote about art. He was the first to use the techniques called Frottage and Grattage in art, which involve rubbing the canvas.

All content from Kiddle encyclopedia articles (including the article images and facts) can be freely used under Attribution-ShareAlike license, unless stated otherwise. Cite this article:
Max Ernst Facts for Kids. Kiddle Encyclopedia.