National Museum Cardiff (Welsh: Amgueddfa Genedlaethol Caerdydd) is a museum and art gallery in Cardiff, Wales. The museum is part of the wider network of Amgueddfa Cymru – National Museum Wales. Entry is kept free by a grant from the Welsh Government; however, they do ask for donations throughout the museum.

The National Museum of Wales was founded in 1905, with its royal charter granted in 1907. Part of the bid for Cardiff to obtain the National Museum for Wales included the gift of the Cardiff Museum Collection, then known as "Welsh Museum of Natural History, Archaeology and Art," which was formally handed over in 1912. The Cardiff Museum was sharing the building of Cardiff Library, and was a sub-department of the library until 1893. Construction of a new building in the civic complex of Cathays Park began in 1912, but owing to the First World War it did not open to the public until 1922, with the official opening taking place in 1927. The architects were Arnold Dunbar Smith and Cecil Brewer, although the building as it now stands is a heavily truncated version of their design.

The museum has collections of archaeology, botany, fine and applied art, geology, and zoology.

In 2011, with funding from the Clore Duffield Foundation, the former Glanely Gallery was transformed into the Clore Discovery Centre, which offers hands-on exploration of the museums 7.5 million items that are normally in storage, including insects, fossils and Bronze Age weapons. School groups, formal and informal groups can also be accommodated but should book in advance. 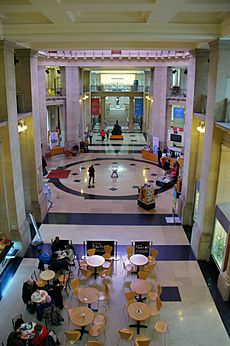 The National Museum of Art opened in 2011.

The collection of Old Master paintings in Cardiff includes, among other notable works, The Virgin and Child between Saint Helena and St Francis by Amico Aspertini, The Poulterer's Shop by Frans Snyders and A Calm by Jan van de Cappelle. A collection of landscape paintings in the classical tradition includes works by Claude, Gaspard Dughet, Salvator Rosa and two works by Nicolas Poussin: The Funeral of Phocion and The Finding of Moses (the latter owned jointly by the Museum and the National Gallery, London). These works prefigure the career of the Welsh-born Richard Wilson, called "the father of British landscape painting". In 1979 four cartoons for tapestries illustrating scenes from the Aeneid were bought as works by Peter Paul Rubens, but the attribution is now disputed.

There is a gallery devoted to British patronage of the 18th century, in particular that of Sir Watkin Williams Wynn, who was nicknamed 'the Welsh Medici' for his lavish spending on the arts. Included is a portrait of Williams-Wynn in Rome with fellow Tourists by Pompeo Batoni, one of his second wife by Sir Joshua Reynolds and his chamber organ designed by Robert Adam. Other paintings of note from this period is a portrait of Viscountess Elizabeth Bulkeley of Beaumaris as the mythological character Hebe, by the 'sublime and terrible' George Romney, and Johann Zoffany's group portrait of Henry Knight, a Glamorgan landowner, with his children. 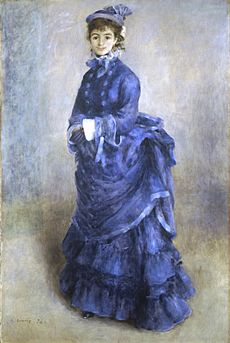 La Parisienne by Pierre-Auguste Renoir, one of the National Museum's most popular works

The collection of French art assembled by Margaret and Gwendoline Davies, granddaughters of the wealthy industrialist David Davies bequeathed to the National Museum in the 1950s and 1960s, make Wales's National Gallery one of international standing. It includes the largest group of paintings by Honoré Daumier in the world and the most important by Jean-François Millet in Britain. Works by Claude Monet include Venetian scenes such as San Giorgio Maggiore at Dusk and examples from his Rouen Cathedral and Water Lilies series. Post-impressionism is represented by Van Gogh's late work Rain at Auvers, and by Paul Cézanne's The François Zola Dam, the first painting by the artist to be displayed in a British public collection. The two most famous works in the Davies Sisters' collection are La Parisienne by Pierre-Auguste Renoir, exhibited in the First Impressionist Exhibition, and a version of Rodin's Kiss cast in bronze.

The art gallery has works by all of the notable Welsh artists, including landscapes by Richard Wilson and the pioneering Thomas Jones. There is a considerable body of work by John Gibson, Queen Victoria's favourite sculptor, and major paintings by Augustus John and his sister Gwen John, including the former's famous image of Dylan Thomas. Ceri Richards is well represented. The artistic output of David Jones is well represented, but seldom on display owing to the fragile nature of his works on paper. Wales's most prominent contemporary painter, Sir Kyffin Williams (1918–2006), also features in the collection.

All content from Kiddle encyclopedia articles (including the article images and facts) can be freely used under Attribution-ShareAlike license, unless stated otherwise. Cite this article:
National Museum Cardiff Facts for Kids. Kiddle Encyclopedia.