Kids Encyclopedia Facts
This page is about the civic centre area in Cardiff. For other uses, see Cathays Park (disambiguation).

Cathays Park (Welsh: Parc Cathays) or Cardiff Civic Centre is a civic centre area in the city centre of Cardiff, the capital city of Wales, consisting of a number of early 20th century buildings and a central park area, Alexandra Gardens. It includes Edwardian buildings such as the Temple of Peace, City Hall, the National Museum and Gallery of Wales and several buildings belonging to the Cardiff University campus. It also includes Cardiff Crown Court, the administrative headquarters of the Welsh Government, and the more modern Cardiff Central police station. The Pevsner architectural guide to the historic county of Glamorgan judges Cathays Park to be "the finest civic centre in the British Isles". The area falls within the Cathays electoral ward.

Cathays Park was formerly part of Cardiff Castle grounds. The present day character of the area owes much to successive holders of the title the Marquess of Bute, and especially the 3rd Marquess of Bute, an extremely successful and wealthy businessman. They acquired much of the lands in Cathays through investment and by inheritance through a marriage to Charlotte Windsor in 1766.

The idea of acquiring the Cathays House park as an open public space was raised in 1858 and again in 1875. In 1887 it was suggested the park could commemorate Queen Victoria's Golden Jubilee. Negotiations didn't begin until 1892, when Lord Bute agreed to sell 38 acres for £120,000 (equivalent to £13 million in 2016 ). The idea of relocating the Town Hall to the park was controversial, but it was also proposed to locate a new University College building there. 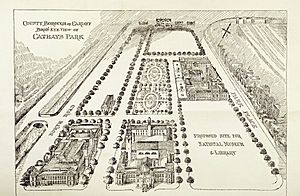 On 14 December 1898, the local council bought the entire 59 acres (24 ha) of land for £161,000 from the Marquess of Bute (equivalent to £17 million in 2016 ). As part of the sale, the 3rd Marquis of Bute placed strict conditions on how the land was to be developed. The area was to be used for civic, cultural and educational purposes, and the avenues were to be preserved.

A six-month Cardiff Fine Arts, Industrial and Maritime Exhibition which included specially constructed boating lake, a wooden cycling track and an electric railway was held in 1896.

In 1897 a competition was held for a complex comprising Law Courts and a Town Hall, with Alfred Waterhouse, architect of the Natural History Museum in London, as judge. The winners were the firm of Lanchester, Stewart and Rickards, who would later go on to design the Methodist Central Hall in Westminster. These were the first two buildings of the ensemble, and have an almost uniform façade treatment. The east and west pavilions of both façades are identical in design, except for the attic storeys, which are decorated with allegorical sculptural groups. On the Crown Court these are Science and Industry, sculpted by Donald McGill, and Commerce and Industry, by Paul Raphael Montford, while on the City Hall are Music and Poetry by Paul Montford and Unity and Patriotism by Henry Poole.

The third site in this complex went empty until 1910, when the competition for a National Museum of Wales was won by the architects Smith and Brewer. The design parts from the Edwardian Baroque of the Law Courts and City Hall and is more akin to American Beaux-Arts architecture, particularly in the entrance hall where a similarity to McKim, Mead and White's later Metropolitan Museum of Art in New York City has been noted. The Museum site was not bounded to the north by an avenue so there were scarcely any limits on the depth of the building; the 1910 plan was almost twice as deep as it was broad. The First World War, however, ensured that progress on the building was very slow. By 1927 part of the East range, with the lecture theatre funded by William Reardon Smith, was complete. Further extensions came only in the 1960s and 1990s; these remained faithful to the original design on the exterior (and included sculpture by Dhruva Mistry) but are of a neutral character on the inside.

Due to presence of the then Welsh Office building, by the 1990s 'Cathays Park' became used by some as a metonym for that Government Department, and after devolution in 1999, for the Welsh Government's civil servants and ministerial offices.

In addition to the large lawn in front of the City Hall, Cathays Park includes three formal gardens and a tree lined park. All of the spaces are within conservation areas and many of the surrounding buildings are listed. The open spaces are very important to the image of the city. Several important buildings overlook these well kept spaces. Each of the three gardens has its own very different character and each retains its original layout.

Named after Alexandra of Denmark, the queen consort of Edward VII, Alexandra Gardens is located at the heart of the civic centre. It consists of 2.5 hectares of beautifully maintained flower beds and grass, with the Welsh National War Memorial standing at its centre.

Situated in front of the National Museum, this garden has as its centrepiece a stone circle constructed in 1899, when the National Eisteddfod of Wales was held in Cardiff. The garden's name refers to the Gorsedd of Welsh Bards, the ceremonial order that governs the Eisteddfod. The landscaped garden, was previously known as Druidical Gardens, but the name Gorsedd Gardens was later adopted. The gardens has statues of subjects including David Lloyd George and Lord Ninian Crichton-Stuart. Overlooking Gorsedd Gardens, though not strictly part of the Cathays Park complex, is Park House (or McConnochie House), an influential work by the Neo-Gothic architect William Burges.

Constructed in honour of the 3rd Marquess of Bute, it contains topiary, a statue of him standing upon a stone pedestal blazoned with a coat of arms, and clipped hedges around the perimeter.

Queen Anne Square is a tree-lined grass park, which was built in the 1930s and 1950s. It was designed to be aligned with the main thoroughfare of King Edward VII Avenue, on a site that was originally planned for a Welsh Parliament House. The square is enclosed by a tree-lined no through road, by Corbett Road to the south and by Aberdare Hall to the south east. 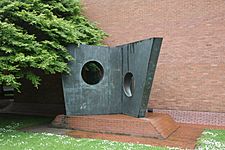 Relief sculpture on the outside of Redwood Building

Memorial for all those who died during the Falklands War 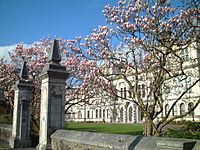 Gate in the front of the main building of Cardiff University 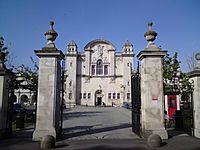 Gate in the rear of the main building of Cardiff University 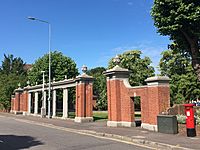 All content from Kiddle encyclopedia articles (including the article images and facts) can be freely used under Attribution-ShareAlike license, unless stated otherwise. Cite this article:
Cathays Park Facts for Kids. Kiddle Encyclopedia.