City Hall (Welsh: Neuadd y ddinas) is a civic building in Cathays Park, Cardiff, Wales, UK. It serves as Cardiff's centre of local government. It was built as part of the Cathays Park civic centre development and opened in October 1906. Built of Portland stone, it is an important early example of the Edwardian Baroque style. It is a Grade I listed building. 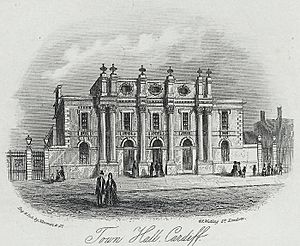 The complex replaced Cardiff's fourth town hall (which was located on the western side of St Mary's Street), built by architect Horace Jones c. 1850–53 (demolished 1913).

The competition to design Cardiff's fifth town hall and adjacent law courts was won in 1897 by the firm of Lanchester, Stewart and Rickards. Construction was carried out by local builders E. Turner and Sons.

Turned and Sons used the world's first all-electrically operated building site, including eight 5 ton cranes to lift the stone blocks. The total building cost was £129,708 (with the concurrently-built Law Courts next door costing £96,583).

As Cardiff received its city charter in 1905 while construction was underway, the current building is known as City Hall.

The distinctive clock tower is 59 m (194 ft) in height has a 3.7 m-diameter (12 ft) gilded dial on each of its four faces. The clock mechanism includes an hour bell and four quarter bells which are each inscribed with mottoes in English or Welsh.

In front of the entrance portico is a rectangular pool with fountains. They were created in July 1969 to mark the investiture of Prince Charles as Prince of Wales.

The building has two memorials. The memorial on the left is dedicated to Polish soldiers, airmen and sailors who gave their lives during the Second World War 1939-1945. The one on the right is dedicated to victims of the war.

Statues in the Marble Hall

The first floor landing of City Hall is decorated with statues in Pentelicon marble of famous figures from Welsh history. These were funded by a gift from David Alfred Thomas, 1st Viscount Rhondda; the personages to be commemorated were decided by a competition in the Western Mail. The Marble Hall was unveiled by David Lloyd George, then Secretary of State for War, on October 27, 1916.

This room has hosted royalty, international statesmen and diplomats, and can seat 500 diners simultaneously. It is used for miscellaneous ceremonies, conferences and events during the year. It is decorated with mouldings picked out in gold leaf, of mermaids and other sea creatures. Three large bronze chandeliers are contemporary to the original architects' design. 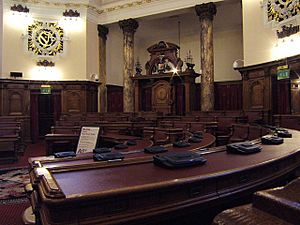 This is located above the main entrance portico and directly below the main dome of the building. The chamber was designed to host Cardiff's Council meetings (which have subsequently been relocated to Atlantic Wharf). The dome of City Hall is supported by four massive pillars of Italian marble. The chamber is panelled throughout in oak.

The cover of the Catatonia single "Mulder and Scully" has a UFO above the building similar to the movie poster for Independence Day.

All content from Kiddle encyclopedia articles (including the article images and facts) can be freely used under Attribution-ShareAlike license, unless stated otherwise. Cite this article:
City Hall, Cardiff Facts for Kids. Kiddle Encyclopedia.