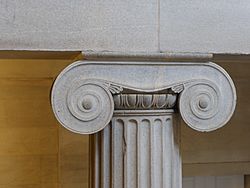 Closeup of Ionic Order Column. The scroll-like ornament at the top of the column is a volute

The Ionic order is one of the three main classical orders (styles) of ancient Greek and Roman architecture. The other two are the Doric order and the Corinthian order (which gave rise to the Composite order). The Ionic capital is notable for its use of volutes. The Ionic columns normally stand on a base which separates the shaft of the column from the stylobate or platform. The cap is usually enriched with egg-and-dart. It was a popular style in Athens. The Athenians considered themselves Ionians.

All content from Kiddle encyclopedia articles (including the article images and facts) can be freely used under Attribution-ShareAlike license, unless stated otherwise. Cite this article:
Ionic order Facts for Kids. Kiddle Encyclopedia.