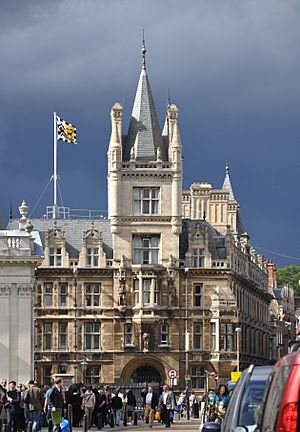 Gonville and Caius College is one of the colleges of the University of Cambridge, England. It is often called Caius (said keys) by the students. It was created in 1348 by Edmund Gonville who gave money to build it. In 1557 John Caius, a doctor, left some more money after studying at the college. The modern name comes from these two people. It now has about 700 students.

Being old, the college has kept many traditions. For example, there is a formal dinner every night. Also, when students go home for holiday they need to get an official permission from a Fellow (teacher) to leave.

Some very famous people have studied at this College. Twelve of them have won a Nobel Prize:

Stephen Hawking is also a Fellow at Gonville and Caius.

All content from Kiddle encyclopedia articles (including the article images and facts) can be freely used under Attribution-ShareAlike license, unless stated otherwise. Cite this article:
Gonville and Caius College, Cambridge Facts for Kids. Kiddle Encyclopedia.