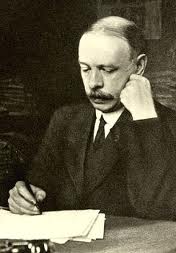 Charles Wood was born in Armagh, Ireland. His father sang in the Cathedral choir. Charles had music lessons from the cathedral organist, then he went to the Royal College of Music where he studied composition with C.V.Stanford and Hubert Parry. He also learned to play the horn and piano. After four years he went to Selwyn College, Cambridge, at first to study, then to teach harmony and counterpoint. In 1889 he got a teaching job at Gonville and Caius College, Cambridge. Soon he became their first Director of Music and Organist. When Stanford died, Wood became Professor of Music at Cambridge.

Wood is mainly remembered today for his Anglican church music. He wrote music for the Communion Service and service settings of the Magnificat and Nunc dimittis. These are often sung today in cathedrals and churches. He wrote many fine anthems including O thou, the central orb. In Cambridge he is remembered for the chimes he wrote for the clocks of Gonville and Caius College.

His pupils included Ralph Vaughan Williams at Cambridge and Herbert Howells at the Royal College of Music.

All content from Kiddle encyclopedia articles (including the article images and facts) can be freely used under Attribution-ShareAlike license, unless stated otherwise. Cite this article:
Charles Wood Facts for Kids. Kiddle Encyclopedia.