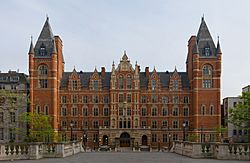 The front facade of the Royal College of Music

The Royal College of Music was founded by Royal charter. The president was the Prince of Wales (later King Edward VII). The president has always been a member of the royal family. The first director was Sir George Grove and he was followed by Sir Hubert Parry. The first building was opposite the west side to the Royal Albert Hall, but in 1894 the RCM moved to a larger building south of the Royal Albert Hall on Prince Consort Road. The College is still there, but there have been many extensions and improvements to the building since then.

There are about 520 students at the RCM. About 170 of these are post-graduate students. The college can award degrees and diplomas in music. Composers and performing musicians can study there. There is a large museum of musical instruments. Next to the main building is a 400-seater opera house, the Britten Theatre, opened in 1986. There are now over 600 students from about 50 countries.

The director of the Royal College of Music is Dr Colin Lawson.

Some famous people who studied at the Royal College of Music

All content from Kiddle encyclopedia articles (including the article images and facts) can be freely used under Attribution-ShareAlike license, unless stated otherwise. Cite this article:
Royal College of Music Facts for Kids. Kiddle Encyclopedia.