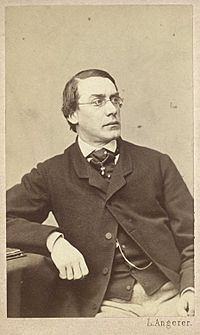 Pauer formed a direct link with great Viennese traditions: he was born in Vienna, his mother was a member of the famous Streicher family of piano makers, and for a time (1839–44) he was a piano pupil of Mozart's son, F. X. W. Mozart and a composition student of Simon Sechter. After further study with Franz Lachner in Munich (1845–47) he worked as a conductor and composer in Mainz, before moving to London in 1851.

During the Great 1862 International Exhibition in South Kensington he was engaged to perform daily piano recitals in the Exhibition building.

From the outset Pauer's piano playing was admired in London, and there he developed a series of concerts, with copious programme notes, that illustrated the development of keyboard music from 1600 to modern times; in later years he lectured on this and many other topics. For five years, he was on the staff of the National Training School for Music (1859–64) and was later recruited in 1876 as principal Piano Professor in the newly formed Royal College of Music, he was also associated with the Music Faculty at University of Cambridge.

Pauer's interest in early keyboard music and historically informed performance was reflected in his numerous editions. He was also active as an author and arranger. He retired in 1896 to Jugenheim in Germany, where he died in 1905.

All content from Kiddle encyclopedia articles (including the article images and facts) can be freely used under Attribution-ShareAlike license, unless stated otherwise. Cite this article:
Ernst Pauer Facts for Kids. Kiddle Encyclopedia.