Dame Joan Alston Sutherland, OM, AC, DBE (7 November 1926 – 10 October 2010) was an Australian dramatic coloratura soprano noted for her contribution to the renaissance of the bel canto repertoire from the late 1950s through to the 1980s.

One of the most remarkable female opera singers of the 20th century, she was dubbed La Stupenda by a La Fenice audience in 1960 after a performance of the title role in Handel's Alcina. She possessed a voice of beauty and power, combining extraordinary agility, accurate intonation, "supremely" pinpoint staccatos, a splendid trill and a tremendous upper register.

Her friend Luciano Pavarotti once called Sutherland the "Voice of the Century"; Montserrat Caballé described the Australian's voice as being like "heaven". Sutherland was the first Australian to win a Grammy Award, for Best Classical Performance – Vocal Soloist (with or without orchestra) in 1962. 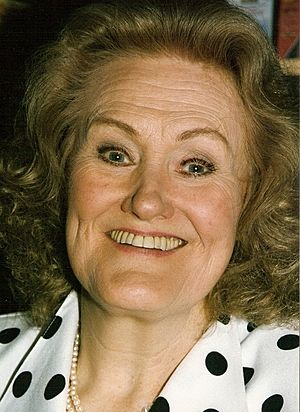 Born in Sydney, Australia, she studied first with her mother and later with John and Aida Dickens. After a few public appearances, notably in Henry Purcell's Dido and Aenas and Eugene Goossens' Judith, she left for London, England in 1951 to continue her vocal studies with Clive Carey.

She was hired by the Royal Opera House as a utility soprano, making her debut in 1952, as the First Lady in Mozart's The Magic Flute. She went on singing a wide variety of roles such as Amelia (Un ballo in maschera), Aida (Aida), Agathe (Der Freischutz) and Eva (Die Meistersinger von Nurnberg), and also created the role of Jennifer in Michael Tippett's The Midsummer Marriage in 1955.

Sutherland married Australian conductor and pianist Richard Bonynge on 16 October 1954. Their son, Adam, was born in 1956. He recognized her potential for the bel canto repertoire and guided her in that direction, which proved a sensational success and launched her international career.

She was rapidly invited to appear at most of the great opera houses of the world (Milan, Paris, New York, etc.) to great acclaim. 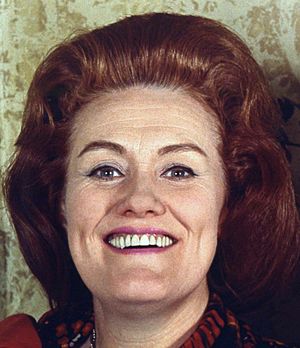 On 11 October 2010, Sutherland's family announced that she had died at her home at Les Avants in Switzerland the previous day of cardiopulmonary failure. Her funeral was held on 14 October and Opera Australia planned a tribute to her. Artistic director of Opera Australia, Lyndon Terracini, said "We won't see her like again. She had a phenomenal range, size and quality of voice. We simply don't hear that any more." Sutherland is survived by her husband, son, daughter-in-law and two grandchildren.

Australian Prime Minister Julia Gillard said, "She was of course one of the great opera voices of the 20th century," adding that Dame Joan showed a lot of "Australian values. She was described as down to earth despite her status as a diva. On behalf of all Australians I would like to extend my condolences to her husband Richard and son Adam and their extended family at this difficult time. I know many Australians will be reflecting on her life's work today."

During her career and after, Sutherland received many honours and awards. In 1961, she was made a Commander of the Order of the British Empire (CBE). That year she was named the Australian of the Year. Sutherland is a Distinguished Member of the Sigma Alpha Iota International Music Fraternity.

All content from Kiddle encyclopedia articles (including the article images and facts) can be freely used under Attribution-ShareAlike license, unless stated otherwise. Cite this article:
Joan Sutherland Facts for Kids. Kiddle Encyclopedia.