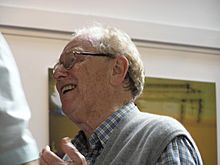 Sir Charles Mackerras, (born 17 November 1925; died 14 July 2010) was an Australian conductor. He was very famous for his conducting of operas, especially the operas of Janáček and Mozart, and the comic operas of Gilbert and Sullivan.

Mackerras was born in Schenectady, New York, and was brought up in Sydney, Australia. He went to the New South Wales Conservatory to study oboe, piano and composing. He became an oboe player with the Sydney Symphony Orchestra during World War II, and was made the principal oboist in 1946. He conducted the orchestra at the opening of the Sydney Opera House in 1973. Five years later he was the first Australian conductor to be the orchestra's principal conductor.

He died from cancer in London, where he lived for many years.

All content from Kiddle encyclopedia articles (including the article images and facts) can be freely used under Attribution-ShareAlike license, unless stated otherwise. Cite this article:
Charles Mackerras Facts for Kids. Kiddle Encyclopedia.