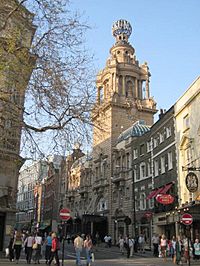 English National Opera (ENO) is an opera company based in London, England. The opera house where it performs is called the London Coliseum. It is in St. Martin's Lane, very near Trafalgar Square. It is one of the two big opera companies in London. The other big one is the Royal Opera (ROH), Covent Garden. The English National Opera is different because the operas there are always sung in English. The ticket prices are not quite as high as at the ROH.

The beginnings of the ENO go back to 1898 when Lilian Baylis gave a series of opera concerts at the Old Vic theatre. About ten years later she started a theatre company there. She put on Shakespeare's plays in a shortened form. She added a small group of dancers to the company. The Sadler's Wells Theatre opened, and the company were called the Vic-Wells Opera Company. The dancers later separated from Vic-Wells and became the Royal Ballet.

The company toured while the theatre was closed during the Second World War. At the end of the war it came back and was called Sadler's Wells Opera Company, and the theatre opened again with a performance of Benjamin Britten's Peter Grimes. It was the first English opera since the time of Purcell to become internationally famous. In 1968 Sadler's Wells Opera moved from Sadler's Wells Theatre to the London Coliseum. Six years later the company was renamed English National Opera.

Since then the ENO has put on many great opera productions. For many years the general director was Peter Jonas, the artistic director was David Poutney and the conductor (musical director) was Mark Elder.

In 2004 many improvements were made to the building. While the building was going on the ENO performed in the Barbican Centre.

Although ENO performs all operas in English, in 2005 it introduced surtitles at the Coliseum. This makes it easier for the audience to understand the words being sung.

In 2007 the conductor Edward Gardner became music director of ENO.

All content from Kiddle encyclopedia articles (including the article images and facts) can be freely used under Attribution-ShareAlike license, unless stated otherwise. Cite this article:
English National Opera Facts for Kids. Kiddle Encyclopedia.