Hansel and Gretel (German: Hänsel und Gretel) is an opera by nineteenth-century composer Engelbert Humperdinck, who described it as a Märchenoper (fairy-tale opera). The libretto was written by Humperdinck's sister, Adelheid Wette, based on the Grimm brothers' fairy tale "Hansel and Gretel". It is much admired for its folk music-inspired themes, one of the most famous being the "Abendsegen" ("Evening Benediction") from act 2.

The idea for the opera was proposed to Humperdinck by his sister, who approached him about writing music for songs that she had written for her children for Christmas based on "Hansel and Gretel". After several revisions, the musical sketches and the songs were turned into a full-scale opera.

Humperdinck composed Hansel and Gretel in Frankfurt in 1891 and 1892. The opera was first performed in the Hoftheater in Weimar on 23 December 1893, conducted by Richard Strauss. It has been associated with Christmas since its earliest performances and today it is still most often performed at Christmas time. 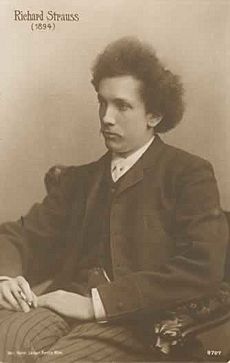 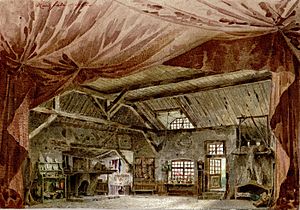 Gretel stitches a stocking, and Hansel is making a broom. Gretel sings to herself as she works. Hänsel mocks her, singing to the same tune a song about how hungry he is. He wishes for mother to come home. Gretel tells him to be quiet and reminds him of what father always says: "When the need is greatest, God the Lord puts out His hand." Hansel complains that one cannot eat words, and Gretel cheers him up by telling him a secret: A neighbor has given mother a jug of milk, and tonight she will make a rice pudding for them to eat. Hansel, excited, tastes the cream on the top of the milk. Gretel scolds him and tells him he should get back to work. Hansel says that he does not want to work, he would rather dance. Gretel agrees, and they begin to dance around.

Mother enters, and she is furious when she finds that Hansel and Gretel have not been working. As she threatens to beat them with a stick, she knocks over the jug of milk. Mother sends Hansel and Gretel to the haunted Ilsenstein forest to look for strawberries. Alone, she expresses her sorrow that she is unable to feed her children, and asks God for help.

From far off, father sings about how hungry he is. He bursts into the house, roaring drunk, and kisses mother roughly. She pushes him away and scolds him for being drunk. He surprises her by taking from his pack a feast: Bacon, butter, flour, sausages, fourteen eggs, beans, onions, and a quarter pound of coffee. He explains to her that beyond the forest, it is almost time for a festival, and everyone is cleaning in preparation. He went from house to house and sold his brooms at the highest prices. As father and mother celebrate, he suddenly stops and asks where the children are. Mother changes the subject to the broken jug, and after she finishes telling him the story, he laughs, then asks again after the children. She tells him that they are in the Ilsenstein forest. Suddenly scared, father tells her that the forest is where the evil Gingerbread Witch (literally, "Nibbling Witch") dwells. She lures children with cakes and sweets, pushes them into her oven, where they turn to gingerbread, and then eats them. Father and mother rush to the forest to search for their children.

Here there is a prelude which begins the act, called the "Witch-ride". Sometimes, the two acts are linked to each other, and the prelude is treated as an interlude.

Scene 1: In the forest. Sunset.

Gretel weaves a crown of flowers as she sings to herself. Hansel searches for strawberries. As Gretel finishes her crown, Hansel fills his basket. Gretel tries to put the crown on Hansel, but, saying that boys do not play with things like these, he puts it on her head instead. He tells her that she looks like the Queen of the Wood, and she says that if that's so, then he should give her a bouquet, too. He offers her the strawberries. They hear a cuckoo calling, and they begin to eat the strawberries. As the basket empties, they fight for the remaining strawberries, and finally, Hansel grabs the basket and dumps the leftovers in his mouth. Gretel scolds him and tells him that mother will be upset. She tries to look for more, but it is too dark for her to see. Hansel tries to find the way back, but he cannot. As the forest darkens, Hansel and Gretel become scared, and think they see something coming closer. Hansel calls out, "Who's there?" and a chorus of echoes calls back, "He's there!" Gretel calls, "Is someone there?" and the echoes reply, "There!" Hansel tries to comfort Gretel, but as a little man walks out of the forest, she screams in terror.

The little man turns out to be the Sandman. He calms the frightened children down by telling them that he loves them dearly, and that he has come to put them to sleep. He puts grains of sand into their eyes, and as he leaves they can barely keep their eyes open. Gretel reminds Hansel to say their evening prayer, and after they pray, they fall asleep on the forest floor. 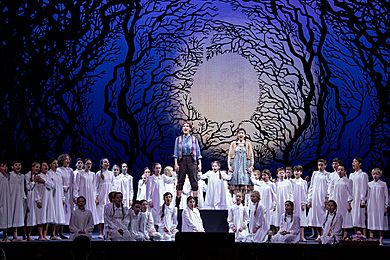 Traumpantomime [dream pantomime]. Fourteen angels come out and arrange themselves around the children to protect them as they sleep. They are presented with a gift. The forest is filled with light as the curtain falls.

The Dew Fairy comes to wake the children. She sprinkles dew on them, sings of how wonderful it is to be alive in the morning with the beauty of the forest surrounding her, and leaves as the children stir. Gretel wakes first, and wakes the sleepy Hansel. They tell each other of their mutual dream, of angels protecting them as they slept.

Suddenly they notice behind them a glorious gingerbread house. The roof is slated with cakes, the windows are of licorice, and the walls are decorated with cookies. On the left side is an oven, on the right side is a cage, and around it is a fence of gingerbread children. Unable to resist temptation, they take a little bit of the house and nibble on it.

The witch takes out her wand and calls out, "Stop!" Hansel and Gretel are frozen to the spot where they stand. Using the wand, the witch leads Hansel to the cage. The witch leaves him stiff and slow of movement. She tells Gretel to be reasonable, and then the witch goes inside to fetch raisins and almonds with which to fatten Hansel. Hansel whispers to Gretel to pretend to obey the witch. The witch returns, and waving her wand, says, "Hocus pocus, holderbush! Loosen, rigid muscles, hush!" Using the wand, the witch forces Gretel to dance, then tells her to go into the house and set the table. Hansel pretends to be asleep, and the witch, overcome with excitement, describes how she plans to cook and eat Gretel.

The witch wakes up Hansel and has him show her his finger. He puts out a bone instead, and she feels it instead. Disappointed that he is so thin, the witch calls for Gretel to bring out raisins and almonds. As the witch tries to feed Hansel, Gretel steals the wand from the witch's pocket. Waving it towards Hansel, Gretel whispers, "Hocus pocus, holderbush! Loosen rigid muscles, hush!" As the witch turns around and wonders at the noise, Hansel discovers that he can move freely again.

The witch tells Gretel to peek inside the oven to see if the gingerbread is done. Hansel softly calls out to her to be careful. Gretel pretends that she does not know what the witch means. The witch tells her to lift herself a little bit and bend her head forward. Gretel says that she is "a goose" and doesn't understand, then asks the witch to demonstrate. The witch, frustrated, opens the oven and leans forward. Hansel springs out of the cage, and he and Gretel shove the witch into the oven. They dance. The oven begins to crackle and the flames burn fiercely, and with a loud crash it explodes.

Father is heard in the distance, calling for Hansel and Gretel. He and mother enter and embrace Hansel and Gretel. Meanwhile, the gingerbread children pull out from the ruins of the oven the witch, who has turned into gingerbread. Father gathers Hansel, Gretel and the other children around and tells them to look at this miracle. He explains that this is heaven's punishment for evil deeds and reminds them, "When the need is greatest, God the Lord puts out His hand."

For other film versions, see: Hansel and Gretel (film)

All content from Kiddle encyclopedia articles (including the article images and facts) can be freely used under Attribution-ShareAlike license, unless stated otherwise. Cite this article:
Hansel and Gretel (opera) Facts for Kids. Kiddle Encyclopedia.