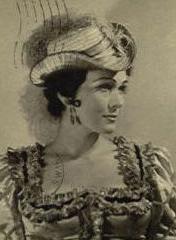 Dame Elisabeth Schwarzkopf DBE (born in Jarotschin in Prussia, 9 December 1915; died Schruns, Austria, 3 August 2006) was a German-born Austrian/British soprano. She was one of the most famous opera singers of the 20th century as well as a famous recitalist. She was particularly known for singing the music of Mozart, Schubert, Strauss, and Wolf.

Elisabeth Schwarzkopf was born in Jarotschin in the province of Posen in Prussia. Schwarzkopf showed an interest in music from an early age. She first sang in an opera in 1928 when she took the part of Eurydice in a school production of Gluck's Orfeo ed Euridice in Magdeburg, Germany. In 1934, Schwarzkopf started to study in Berlin Hochschule für Musik, then she changed teachers and started working with the coloratura soprano Maria Ivogün as well as with Ivogün's husband, the pianist Michael Raucheisen.

Schwarzkopf gave her first professional performance at the Deutsche Oper Berlin on 15 April 1938, as the Second Flower Maiden (First Group) in Act II of Richard Wagner's Parsifal. She sang in Berlin for four years, during which time she joined the Nazi Party. Because of this she was later not allowed to appear in the United States.

In 1942, she was invited to sing with the Vienna State Opera, where her roles included Konstanze in Mozart's Die Entführung aus dem Serail, Musetta and later Mimì in Puccini's La bohème and Violetta in Verdi's La traviata.

Career after the war 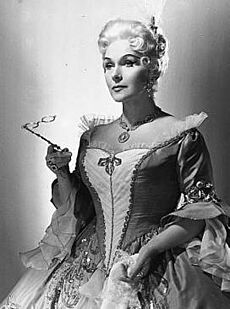 Schwarzkopf as the Marschallin in Richard Strauss' Der Rosenkavalier 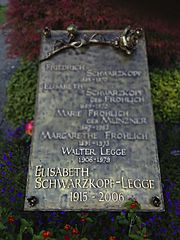 In 1945, Schwarzkopf was given Austrian citizenship so that she would be allowed to sing in the Vienna State Opera. In 1947 and 1948, Schwarzkopf appeared on tour with the Vienna State Opera at London's Royal Opera House at Covent Garden on 16 September 1947 as Donna Elvira in Mozart's Don Giovanni and at La Scala on 28 December 1948, as the Countess in Mozart's The Marriage of Figaro, which became one of her most famous roles.

From that time on she was invited to sing all over the world, including at La Scala, Milan and the San Francisco Opera.

In March 1946, Schwarzkopf had been invited to audition for Walter Legge. Legge was a man who produced classical music recordings in Britain. He had founded the Philharmonia Orchestra. Legge asked Schwarzkopf to sing Hugo Wolf's lied Wer rief dich denn?. He thought she was so good that he gave her an exclusive contract with EMI. They worked a lot together, and they were married on 19 October 1953 in Epsom, Surrey; Schwarzkopf now had British citizenship because of her marriage to an Englishman.

In the 1960s, when Schwarzkopf sang in operas she nearly always sang one of her five favourite operatic roles: Donna Elvira in Mozart's Don Giovanni, Countess Almaviva in The Marriage of Figaro, Fiordiligi in Così fan tutte, Countess Madeleine in Strauss's Capriccio, and the Marschallin in Der Rosenkavalier. She was also good at singing Alice Ford in Verdi's Falstaff. On the EMI label she made several "champagne operetta" recordings like Franz Lehár's The Merry Widow and Johann Strauss II's The Gypsy Baron.

Schwarzkopf's last operatic performance was as the Marschallin on 31 December 1971, in the theatre of La Monnaie in Brussels. For the next several years, she only sang in lieder recitals.

On 17 March 1979, Walter Legge had a serious heart attack. His doctors told him to rest, but instead of resting he went to Schwarzkopf's last recital two days later in Zurich. Three days later, he died.

After retiring, Schwarzkopf taught and gave master classes around the world, especially at the Juilliard School in New York City. She was well known for being an extremely strict teacher who stopped her pupils to criticize every little bit of detail. After living in Switzerland for many years, she went to live in Vorarlberg, Austria.

She was made a doctor of music by the University of Cambridge in 1976, and became a Dame Commander of the Order of the British Empire (DBE) in 1992. She received many other awards.

Schwarzkopf died in her sleep during the night of 2–3 August 2006 at her home in the village of Schruns, in Vorarlberg, western Austria, aged 90.

All content from Kiddle encyclopedia articles (including the article images and facts) can be freely used under Attribution-ShareAlike license, unless stated otherwise. Cite this article:
Elisabeth Schwarzkopf Facts for Kids. Kiddle Encyclopedia.